They coo under the rhythmic thrusts of your fingers, deaf to the heaviness of their own breaths. The three of you are almost there. You tighten your grip, accelerating the movement of your moist fingertips. You slide your thumb over the circle. Then the triangle. Back to the circle. The X. Finally, you wrangle the analog stick like a madman, and their sighs of pleasure reach a fever pitch. Onscreen, a vase on the nightstand next to you tumbles to the ground, shattering. Congratulations; you've achieved orgasm. 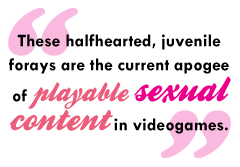 "The sex minigame wasn't anything we were going to go huge on," Game Director Cory Barlog told Electronic Gaming Monthly after the release of God of War II. Yet these halfhearted, juvenile forays are the current apogee of playable sexual content in videogames: a simple rhythm game simulating squeezes, strokes and pelvic thrusts through a well-executed series of button presses.

That's mainly because there are so few existing alternatives. According to Brenda Brathwaite, a professor of game design at Savannah College of Art and Design and an expert on the matter of applying sex to videogames, it's by definition a rarity that sexual content finds its way into a mainstream titles such as God of War. That's actually an advantage for some games: Because of the brevity of the sex scenes (they rarely last more than a minute) and the way the developers handled the material, God of War wasn't confronted with the same moral outrage that another videogame - one with more or less the same sexual content - fell subject to only a few months earlier.

"The sex that was included in God of War didn't feel sensationalized; it didn't feel out of place," Brathwaite said during a lecture at the Game Developers Conference two years ago. "The game was not marketed as an adult game, and the sexual content was not picked up by the mainstream media. It went largely unnoticed."