Grand Theft Outrage
At the moment God of War was released in the summer of 2005, another game with sexual content stole the spotlight. A Dutch programmer by the name of Patrick Wildenborg found some unused code in the PC version of Grand Theft Auto: San Andreas, the fifth instalment of Rockstar Games's infamous series of crime simulators. Tweaking the game to utilize the hidden code, he discovered an extra sex minigame we all know now as "Hot Coffee."

The Hot Coffee mod played more or less the same as the minigames in the God of War series, with the key distinction that it actually showed the bodies of the two characters. By pushing the right sequences of buttons, the player increased the "pleasure meter" of his partner. There was even an extra button in place to change the position and camera angle. The mod became a scandal overnight: Retailers refused to keep the best-selling game in their racks, concerned citizense initiated class-action lawsuits and the U.S. government made inquiries into the studio. All told, the controvery cost Rockstar Games' parent company, Take Two Interactive, millions of dollars.

Compared to even network television, the Hot Coffee sex scenes were actually pretty chaste - after all, both partners remain fully clothed for the duration of the act. Nonetheless, the Hot Coffee mod lacked the attention to detail of the minigames in the God of War series. The latter even received praise for its restraint, while the slightly more in-your-face minigame in Grand Theft Auto: San Andreas was aborted by its creators before it shipped. 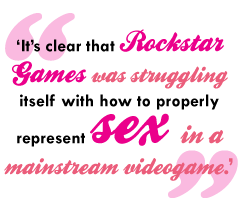 "It's clear that Rockstar Games was struggling itself with how to properly represent sex in a mainstream videogame," says Jan Van Looy, a cultural researcher specializing in videogames, currently working at the university of Umea, Sweden. "I certainly wouldn't mind if more videogames would handle sex the way the God of War games did, instead of the Hot Coffee approach. I like the way they used suggestion and symbolism. There's too many games out there putting emphasis on graphic representation, while they ignore symbolism and other alternative ways of creating meaning."

Wiggle that joystick
Both of these sex games, controversial or not, extend a tradition in videogame design nearly a quarter century old. The source of this tradition can be found in the days of the home computer, which used a decidedly more phallic videogame control device: the joystick. In 1985, German brothers Thomas and Markus Landgraf developed Sex Games for the Commodore 64, a title that revealed the 14- and 16-year-olds' vividly raunchy imagination.

In Sex Games, the player controls a male avatar, presented in cartoonish 8-bit sprites, who, through the continuous movement of the joystick, humps a representation of a female. The player must max out his partner's "lust" meter by frantically wiggling the joystick before his own "potency" meter (actually just a timer) reduces to zero. There are only five levels in the game, each portraying a different position, and by the time the player reaches the final stage, he commands a scene of group sex.