The two brothers claim they released the game as a parody of sports videogames of the era like Decathlon and Summer Games, which encouraged the same type of relentless joystick abuse to simulate running, swimming or rowing."For a 16-year-old, it was only a short leap of thought from the obscene joystick wiggling of Summer Games to the idea of producing a rhythm-based sex/sports videogame," says Markus Landgraf, now an engineer at the European Space Agency.

According to Landgraf, it's feasible that Sex Games and other pornographic games of that era could have seeped into the collective consciousness of other adolescents, who would later become the game designers of today. After all, artists are often influenced - directly or indirectly - by the work of those who came before them. "I guess there were thousands of black-market copies of Sex Games out there for each copy we actually sold," claims Landgraf. "The game went everywhere. There is a good chance that some of the now grown-up game designers have learned to love the joystick shaking in their younger years, and are now putting it in their games."

You the man!
The sex minigames in God of War and Grand Theft Auto: San Andreas may have inherited something else from Sex Games: their chauvinistic male undertone. Yes, the women's sexual pleasure in all four sex scenes is a prominent factor (and consistent with the sexual culture of our day and age), but your bedmates' submissive commentary does little more than enhance the machismo of the games' lead characters. San Andreas rewards the player's prowess in virtual sex through such exclamations as "Oh yeah baby, you the man!" and God of War's Kratos earns a "Thank you, milord" after he has thoroughly gratified his partners. 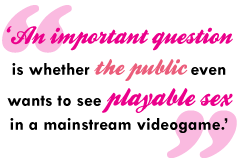 There's still plenty of work to be done on the way sex minigames are implemented in future releases. "An important question is whether the public even wants to see playable sex in a mainstream videogame," says Van Looy. "The fact that it's playable makes it instrumental, and that is a huge obstacle: The instrumentality makes it slide way too easily into the realm of pornography. And that's a dealbreaker: You rarely see full-on sexual intercourse in a mainstream film - the sex is more often suggested rather than shown. By that standard, I'm more convinced by the way the God of War games handled this material."

Cory Barlog has mentioned that his team will likely expand the sexual content in the next installment of the God of War series. According to Brathwaite, that's not a moment too soon: As subtle as the God of War sex minigames may be, they're still just tacked onto the core gameplay. "In other forms of media, there's a build-up," she says. "The romantic tension, the development of intimacy ... that sort of stuff is rarely done in games."

Ronald Meeus is a freelance writer residing in Belgium. He can be reached at [email protected].