Not too long ago, Age of Conan made headlines with a rumor that turned heads across the internet - not only would it contain nudity, it would actually allow players to have sex. Players would be able to screw each other's brains out in-game and get a temporary stat-boost for their ... er ... pleasure. When the game actually shipped, however, the sex turned out to be nothing more than a casual reference. Female player characters could still go topless, but actual coitus wasn't in the code. 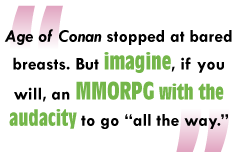 Age of Conan stopped at bared breasts. But imagine, if you will, an MMORPG with the audacity to go "all the way."

Garwulf the Skald has had a busy day. He woke up after a night of wild lovemaking with a beautiful woman. Then he slaughtered a bunch of evil and strange forest creatures. Later, just for good measure, he bribed the innkeeper and snuck into the room of another warrior, slaughtering him for the experience points. Then he seduced one of the female player characters and got her pregnant. Finally, after a long day of slaughtering and fornicating, he paid the innkeeper for a room of his own, confident in the knowledge that even though he could fall victim to a player killer, he might be able to take revenge on his attacker in the morning.

The scenario is from a real game, called Legend of the Red Dragon. It's been around since 1989, and between its streamlined gameplay and adult sensibilities, it should have been one of the most important games ever produced. But, in the history of computer games, it's little more than a footnote.

Around 1990, if you wanted to go online and interact with other people, you went to a bulletin board system (BBS). One of the things you could do on these BBSs was play multiplayer "door games."

Legend of the Red Dragon (LoRD) was king of the door games. It was a text-only multiplayer adventure that provided everything from action to romance to child rearing. Many BBSes had an active community of LoRD players. By 1993, LoRD was positioned to be a progenitor of the next generation of online multiplayer games.

Players in LoRD could take a certain number of actions every day. They could fight monsters in the forest, kill their fellow players and try to slay the Red Dragon itself. If violence wasn't appealing, an entire sexual life awaited them.

Every day, a player could send a "flirt" to another player character, which included everything from a shy wink to sex to a marriage proposal. The sex had consequences - characters could contract sexually transmitted diseases, and female characters could get pregnant and have children. A player could also try to seduce the bard or barmaid, with success based on charm points.

By 1993, access to the internet was available to the general public, who discovered multi-user dungeons (MUDs). It was the beginning of the end - the next generation of massively multiplayer games were based on MUDs, rather than BBS door games like LoRD. By 1998, the BBS had become a fringe element of the online world, and Legend of the Red Dragon, along with other BBS door games like Trade Wars and Excitilus, was left behind.

When I was a Sex Goddess Amanda Yesilbas 57 Comments

Letters to the Editor: sEx The Escapist Staff 0 Comments