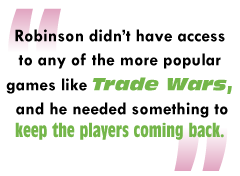 Seth Robinson was running a BBS in 1989 when he decided to write Legend of the Red Dragon. Robinson didn't have access to any of the more popular games like Trade Wars, and he needed something to keep the players coming back.

"[It] was written in horrible 'learn as you go through force of will' C," Robinson said. "I was just looking to make something that would get people to call back once in a while. The very first version was just the chat wall and the flirt once-per-day thing."

Robinson began to look at what worked in other games, and incorporated those features into his own creation. These elements came together in LoRD to create a unique blend of action and romance.

"There was this really cool futuristic casino door [game] where you had a certain number of turns," recalled Robinson. "But what really impressed me were the random events that could occur and give the player a choice, like find[ing] a black box that let you cheat, and if you picked it up you would invariably get thrown out the airlock by space police. It also had a random event where you would 'spend the night' with a woman you happened to meet. Those little things made all the difference."

Shortly thereafter, Robinson added random events to LoRD - everything from rescuing a maiden from a castle (who would reward you with sexual favors if your player character was male) to playing blackjack with a woodland denizen. These events added some much-needed variety that prevented the game from becoming a simple level grind.

Where LoRD truly shone, however, was in how it dealt with sex. The game's treatment of sexuality matured as Robinson did. When he wrote the first version, Robinson was a teenager, and the possible interactions reflected an adolescent view of flirting and sexuality. In what may have been a case of wish fulfillment, Robinson wrote himself in as the bard Seth Able, whom the female characters could gain experience from by seducing.

"In retrospect," Robinson said, "it's really pretty preposterous to have a kid who's never kissed a girl put himself in a game digitally scoring with thousands of women. Hmm - what would Freud say?"

For male characters, the sexual elements originated with the option to flirt with Violet, the barmaid. Every time Robinson came out with a new version of LoRD, he tried to push the flirting farther. It wasn't long before Robinson incorporated a more nuanced view of sexuality into the game.

His inspiration was often autobiographical. Robinson wrote in the possibility of contracting sexually transmitted diseases after he had an experience with Chlamydia. When one of his friends had a stillbirth, Robinson added the possibility of miscarriage to the game, too.

"I wouldn't have bothered if it was simply a thing with an NPC, probably," said Robinson, "but actually getting married to a real player and then sharing the event had a lot more meaning, [and] was more engrossing."