By the time Robinson stopped writing code for LoRD, players could flirt, seduce each other, get married and raise families. There were divorces, pregnancies and even children accidentally getting in the way of a monster and being killed. It was a level of sexual maturity that has rarely, if ever, been expressed in a game since.

Despite the numerous elements that made Legend of the Red Dragon special, the game would never have made the impact it did on the BBS scene if it hadn't gotten out into the world. At the time that Robinson sold his first copy of LoRD, he was advertising it as a game exclusive to his BBS. 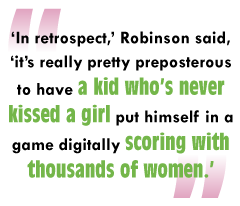 "Eventually, someone asked me if they could run it on their system and offered to pay for it," said Robinson. "I was kind of like, 'Hmm, why not?' So I LHA'd it up and charged $10 for it."

Robinson's first sale was the beginning of a landslide. Legend of the Red Dragon became the center of a rising swell of word-of-mouth advertising. Before he knew it, customers began demanding a DOS port.

"I sold a few hundred copies, carefully writing down each person's name and code in a ledger, and was able to buy my own PC," recalled Robinson. "From there, things took off pretty quickly, and at the height of sales I was finding fifty checks in the mailbox daily."

The game soon spawned numerous spin-offs. The first was a tournament version Robinson wrote for MBBS/Worldgroup named Tournament LoRD, which sold for $300 per copy. The second was written by Joe Marcelletti in 1996 for Wildcat BBS systems. Marcelletti's implementation was so good that Robinson ended up using some features from it in his next version.

While Legend of the Red Dragon had become a fantastic success on the BBS market, Robinson himself was ready to move on. As the new MMOGs were building their own player communities over the Internet and BBSes were shutting down across the globe, Robinson sold the rights to LoRD to Metropolis Gameport, which has maintained the game for its small but devoted community ever since. It's a footnote, but at least it's a living one.

How was it that in the early 1990s, Legend of the Red Dragon had a more mature view of sexuality than Age of Conan in 2008? The answer probably lies with Robinson himself. LoRD was a personal project for him, and as an independent developer at a time when multiplayer games had yet to come under the scrutiny they suffer from today, he had a lot of freedom to let the sexuality of the game evolve over months and years. In his hands, LoRD became a game by an adult for adults, with many of the risks and rewards offered by real life relationships, unconstrained by the ESRB or the need to appeal to a wider audience If we want to find another game that integrates sexuality without pandering to overzealous censors or teenage boys , we may have to wait for another Seth Robinson to come out of the ether with his own pet project, creating as he goes.

Robert B. Marks is a writer, editor, publisher, and M.A. student at Royal Military College in Kingston, Ontario, as well as an avid LoRD player at Nuklear LoRD.