I've been deep in the trenches of a writing project for the past few months. The pages keep rolling by, the characters are talking to me and, like any real writer, I haven't been awake before noon or sober since Lent. When people ask me what I do, I no longer have to make something up about skydiving or investment banking; I just say "author" and watch everyone drop to their knees in awe.

There's a nagging problem, though. At some point, unless I really up the castration rate, several of my characters are going to take their clothes off and have sex. All well and good - Davie Boy in particular certainly deserves it, what with the brain tumor and the leprosy - but how do you pull it off? Let's be clear that I'm talking about sex, rather than sex appeal: two or more people, accessories and wildlife optional, all the possible connections of a Lego set. The problem is making it interesting. There are more ways to create sex scenes than there are to actually hump, but in a world where books, movies, videogames, and the internet have all grabbed their share, it's increasingly tough to stand out from the bunch. Imaginary coitus is a crowded market indeed.

I thought about ducking the whole issue. Then I went half-mad trying to outdo the internet before backing off to a classic JFK-and-Marilyn approach which bored me silly. Finally, I remembered Tijuana bibles, the joys of crude, secret things passed among friends, and figured there's another way to chuck an orgasm-filled custard pie at the world.

Tijuana bibles were Depression-era smut booklets, eight-page comics on cheap paper that gave you the real lives of the rich and famous. You too, my friend, can finally see Donald sweeping Daisy's chimney. J. Wellington Wimpy laying the pipe to Olive Oyl. You can find out once and for all whether Betty and Veronica look the same when you flip them upside down. Big-lipped black people, sex-crazed nuns, grasping old pensioners and every other ugly caricature known to man? Right here in this suitcase, yours for fifty cents. 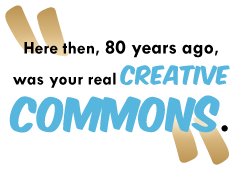 The bibles (no one seems to have figured out the nickname, beyond perhaps a cheap shot at Mexico and a giggle at that other sex-filled book) were produced by anonymous cartoonists, usually to the very crudest standard, and distributed through friends and workmates. Depending on who's counting, the overall readership may have been in the tens of millions. Here then, 80 years ago, was your real Creative Commons; books passed hand-to-hand, advertised purely by word of mouth, easily copied by anyone with basic equipment, enjoying circulations that dwarfed the mainstream. Artists like Art Spiegelman see them as the advance guard of the underground comix scene, and there are certainly echoes of Robert Crumb and Justin Green in there somewhere.