It's a faint echo, though. These books are smut in raw form. Many Tijuana Bibles were at the bottom of the barrel in terms of drawing ability and basic English, and the humor is that distinct, right-on-the-button style that's been drowned out by 50 years of TV comedy and cynicism. The sex is ... well, it makes American Pie look like a Merchant Ivory production. (My favorite so far would have to be Archie getting his head stuck inside Veronica.) This isn't cute nostalgia; it's the real ugly thing, though for all the depravity there's an oddly charming innocence about the whole experience. These bibles existed in an information black hole, passed hand-to-hand in an age that predated the galactic porn megastore we call the internet, and they take a simple, crude, straightforward approach to getting drunk and doing it twice.

In one sense, this artistic approach is dead, killed off like so many other things by the need for sophistication. Playboy showed up in the 1950s, smut photography got better and more widespread and no one needed some badly drawn comic about Prince Edward's royal jewels to get off. Nowadays, the age of digital video has erased the need for dodgy 8-pagers with smudgy ink. The Sheen of Modernity (or the attempt to capture it) infects everything from Iron Man to Photobucket.

In another sense, though, the Tijuana bible spirit is alive and well. At their core those little packages were the currency of small, weird sexual communities - and now, of course, we're all about small, weird communities. 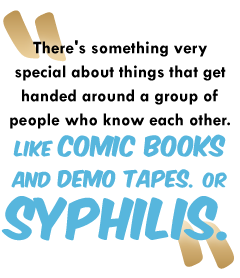 How do you replicate these authentic, rough-hewn things? Where's the market gap in make-believe mating?

Critical Miss: Kill Your Darlings The Wooster 94 Comments
Comments on