Why does an interactive medium passively present anything? Sometimes cinematics introduce characters, crucial elements of the plot or new gameplay mechanics. Oftentimes cut scenes prepare you for an important encounter by deliberately exposing you to information that will be useful later in the fight. Interacting at a high level from the very beginning would be asking a lot from the player. 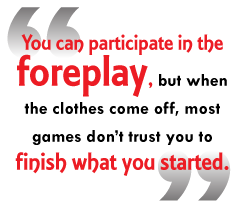 But what if the cut scene was the encounter? Imagine spending hours preparing for an interaction with a character, only to have the game take control when it's finally time to show your stuff. It sounds infuriating, but it's a common way to approach sexuality in an otherwise interactive medium: You can participate in the foreplay, but when the clothes come off, most games don't trust you to finish what you started.

Whether bowing to societal pressures, de-prioritizing inessential content or simply feeling that sex makes for bad gameplay, game developers have typically been reluctant to allow player involvement in virtual sex. But it doesn't have to be that way. Assuming the ratings board didn't care and there were no moral quandaries, would interactive sex in a mainstream single player video game create a "better" experience with more emotional impact?

Presenting sex in the context of a mainstream videogame poses unique challenges. It's not a straightforward competition with winners and losers; but the consequences, both positive and negative, can be equally significant and long-lasting. And with the sophistication of current-gen A.I., camera work and gameplay balancing, we're more ready than ever for a game that demonstrates a more complex understanding of sexual encounters than a cut scene could ever present.

Let's start with the basics. Sexual encounters need to provide incentives to continue playing and discovering. But more importantly, they need to be incentives for developing a relationship with another character.

Context is key, but if the actual game design of sex isn't compelling, it won't be much of a reward. Adventurous developers have often adopted a "Simon Says" approach to lovemaking: mimic a sequence of button presses to take your partner to the heights of ecstasy; miss a beat and the deal is off. The final result is little more than a mediocre cut scene with the bare minimum of player involvement. Worse still, there's no opportunity to excel: You either succeed or fail based on a few quick button presses. Not only does this make the player a spectator in the act, but it presents a view of sexuality that is simplistic even by a teenager's meager standards.

Let's take a more nuanced approach. Sex isn't about mimicking a sequence of button presses; instead, the mechanics of sex involve maneuvering into a position, remaining active in that position while both parties are enjoying themselves, choosing and transitioning into a new position and then repeating the process until both parties are completely satisfied.