As both a means of communication and diversion, the printed word is pretty well established. It's been over five centuries since the invention of the printing press - more than enough time for the printed word to permeate every aspect of modern life. The debate on whether novels can have value beyond mere entertainment has already run its course, and few parents would argue that reading is detrimental to their children's moral development. It's only taken five centuries, but print has finally been universally recognized for what it is: a widespread, accessible source of diverse, relevant and (occasionally) insightful information.

It's possible for videogames to be all those things, too, but they don't have the benefit of a 500-year head start. Instead, the medium seems to labor against a culture constantly on the lookout for something new to fear. Even more perilously, the means to create and distribute games have traditionally been limited to major corporations. While anyone with a typewriter, a pair of scissors and access to a photocopier can print and publish their own esoterica, the implements to create even the most amateur videogame were once out of reach to all but the most devoted bedroom developers. 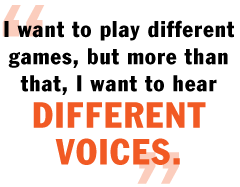 Contemplate the typical Big Studio fare we've been fed so far: It's a field dominated by dwarves killing dragons and space marines killing demons. Granted, there are many games about shooting demons in space that I enjoy and even consider important. But demon-shooting is a single theme, a tiny blip in the vast cosmos of what clever people could do with a new and largely unrefined medium. If we want videogames to be relevant to our lives - and I certainly do - the medium is going to have to push beyond the endless retelling of the same story by the same privileged authors.

I want to play different games, but more than that, I want to hear different voices. Consider a game not about the fantasy violence of the archetypical masculine space soldier, but about real violence; a game which places the player in the role of a father who is forced to recognize the cycle of abuse in which he has become trapped, and must take action to break it. A game that might be described thus:

...a provocation, both in form and in content: in form, because it requires the player to choose not only actions but also an ethical philosophy; in content, because it asks what moral options remain for a person who recognizes himself as monstrous.

That game is The Baron, and it was not, needless to say, published by a Big Studio like EA or Ubisoft - it was written by a Dutch philosopher named Victor Gijsbers. The story is told in plain text, in the style of interactive fiction Infocom popularized in the 80s. The game is not an adventure, but it begins with the premise of one : a fantasy in which the protagonist sees himself as the hero that belies a more sinister reality. Gijsbers wrote and scripted the game himself using a free toolset called Inform, and distributes the game for free over the internet.

The proliferation of high-speed internet access means that self-publishing is a more viable option than ever for game creators. There are lots of independent game developers trying to make a living off of their craft - I'm occasionally one of them - but there's a growing number of people who, like Gijsbers, create free games simply to make their voices heard. These are people for whom game development is not a primary profession; whose background is not in computer science or 3-D modeling; who build games in their spare time out of a curiosity and love for the medium and a desire to make the games that no one else will. Hobbyist game developers, self-published authors. Videogame zinesters.

Letters to the Editor: Going it Alone The Escapist Staff 0 Comments

Sign of the Crab Susan Arendt 8 Comments
Comments on