A Sidhe is an earthen mound where mythical beings live. It's also an independent New Zealand videogame company that's moved away from the hill-dwelling fairy thing to release six titles in the last five years. I've known about them for a long while: Like fantasy films, Antarctic storms and flaccid politicians, Sidhe has become part of the Kiwi landscape. But I'd never gotten near the source code, the how, why and what-the-hell of growing your very own game development ecosystem at the bottom of the South Pacific. So I called them up, begged my way in and spent a week learning the secret. Here it is, in seven easy steps, complete with magic beans and beer.

Begin with nothing
In 1997, the Kiwi gaming industry was virtually a blank slate. Two people, Simon Armstrong and Mark Sibly of Acid Software, had made some commercial titles for the Amiga, and Mark was developing the Blitz Basic game-creation tool. That was it. Just like the rest of the Western world, we had teenagers who enjoyed games and would love to create them for a living, but there was simply nothing here: no infrastructure, culture, supply chain, skills base, contacts, reputation, nothing. You want to play zippy-zaps? Bugger off overseas.

Tyrone McAuley, Stuart Middleton and Mario Wynands needed something more than day jobs. They had a combination of business, programming and artistic chops, so they decided to try games. Might be a fun hobby. Might be a youthful risk, one of those early-20s business experiments that don't last.

Might be a blank slate with some unexpected potential.

Screw it up, then look in the mirror
"In the early years, some of the things we sent out to publishers - I'm embarassed..." Stuart acknowledges. The first three years were brutally messy; professionalism and a knowledge base take time. Simple things can be extraordinarily tough when you start from scratch: How do you make contact with publishers? How do you pitch for work with no track record? What do you say to someone in America to convince them that sending a cheque to New Zealand, wherever the green hell that is, might be worthwhile? 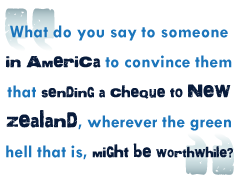 "Initially we didn't understand relationships - we thought having a good game was enough," says Mario. Without good games or relationships, growth is a mystery and it's hard to sustain confidence. There's a question that's very hard to answer, especially when asked by family and friends (explicitly or not): "Why are you doing something so fundamentally ludicrous as starting a videogame company? Really, why?"

Sidhe drummed up $45,000 for a Playstation One development kit, delivered in pieces to Mario's mother's house. They had no guaranteed work and no cash reserves, skirting financial, legal and managerial crises several times. Regular income was a fairy myth, and a 45 grand lump of plastic-and-metal magic beans is a tough way to stay awake at night.

As always happens when friends start a business, the founders felt a tension between plugging away with blind faith and trying to keep things in perspective. Coming from an artistic background, Stuart felt the allure of more established environments and wanted to see what the rest of the world had to offer. He withdrew as a director, selling his shares to the others for a pittance, and eventually left for Melbourne.

Letters to the Editor: Going it Alone The Escapist Staff 0 Comments