If people judged the gaming community by the mask it wears online, they could rightly call it hateful, unstable and xenophobic.

It's also thoughtful, smart and, at times, even courteous. But too often, the anonymity of online communication offers a refuge for language that is increasingly shut out of public life. It's difficult to play popular shooters like Halo or Team Fortress 2 on public servers without encountering racial or homophobic slurs. On websites that cater to gamers, visitors routinely spam comment threads and message boards with unhinged, bigoted troll posts. Our self-contradictions become more obvious as gaming matures and absorbs more people into the fold. The ubiquity of intolerant language and belligerent behavior raises troubling questions about what truly lies behind the mask of online identity.

To a degree, the mask itself poses an insoluble problem. It's comforting to think that we have a "real" self hiding behind all the roles we have to play; the one part of ourselves that is authentic when so much of life is deception. However, that conception of the self might be wishful thinking. During email interviews with Michael Abbott of the Brainy Gamer and Angela Simpson of Lesbian Gamers, both spoke of the blurry line between our online and "real-world" identities. Abbott wonders if "there is no such thing as a fixed identity. ... I think we all construct multiple personae to deal with the world, and virtual online spaces have extended and complicated that activity immensely." Simpson, doubting that online hate-speech really reveals much about the speaker, says, "Social factors play a large role in our behaviors. ... You're not really seeing the 'real' people as it's all dependent on situational or locational aspects." 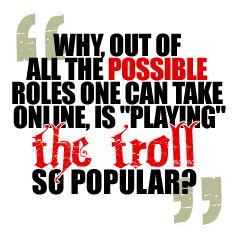 We present different faces to our employers, partners, close friends, families and everyone else we meet; in the online space, we have handles and avatars that enable further transformation. If we do have a true, unchanging self, would we even be able to recognize it? Sherry Turkle, an MIT professor and long-time researcher into how technology changes our conception of identity, writes in her article "Computer Games as Evocative Objects"(in Raessens and Goldstein's The Handbook of Computer Game Studies), "When people adopt online personae they cross a boundary into highly charged territory. Some feel an uncomfortable sense of fragmentation, some a sense of relief. Some sense the possibilities for self-discovery, even self-transformation." When we consider all the ways people behave online, we have to remember this warning before dismissing them: Some people come into their own with the freedom that anonymity and changeability provide.