It's not enough to use anonymity as a way to diminish or dismiss the intolerance expressed online, especially among gamers. Not everyone sees the internet as a place to become a "different" person. For some, it's a place to tap into another aspect of their identity that may not find expression elsewhere. While online personae may empower people to provoke and insult with impunity, it's striking how often that that behavior is manifested through hate speech. The "bigoted troll" persona appears again and again within this community. Why, out of all the possible roles one can take online, is "playing" the troll so popular?

Simpson finds this behavior counterintuitive, saying, "You would actually think it would work the other way, wouldn't you? Gaming is inherently about open worlds, new worlds where anything and everything is possible. You would think logically that would actually have a positive gearing effect on those within. There's also the 'hero' archetype in gaming - it feels good to be the good guy." If the internet represents the only space left where people can say what they want without fear of censure or reprisal, just as effortlessly as they inhabit different characters, what does it mean when the freest speech is often the most hateful?

At the very least, it's cause for concern about how well society has succeeded in getting over old biases. The public sphere has doubtless become far more progressive in its approach to homosexuality, gender and race, but among gamers (where one might not expect to find a hotbed of antique biases) there is surprisingly deep well of bigotry and resentment. It erupts almost every time the community tries to discuss issues of prejudice and equality. Newsweek's N'Gai Croal observed racially charged imagery in the Resident Evil 5 trailer, and almost every discussion of his comments was soon lost in a cacophony of outraged accusations of "reverse racism" alongside personal attacks on Croal and anyone else who appeared to consider his point. Recently, a few feminist blogs and gaming sites raised concerns about the upcoming Fat Princess and the attitudes implied by that game's central conceit. Elements of the gaming community were more than happy to prove the bloggers' point: Misogyny and a cruel and juvenile attitude towards the obese are commonplace among gamers. While society at large tries to move beyond these entrenched prejudices, our community seems determined to defend them, immediately mobilizing attacks against anyone critical of their beliefs. 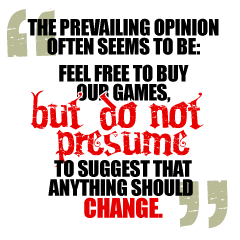 There's a paradox on display here. For years, the gaming community has sought to expand and diversify, to transform its pastime from a "fringe" activity into mainstream entertainment. Now that this has largely been accomplished, we're still acclimating to our expanded user-base. People with different backgrounds and experiences bring different perspectives to the medium, and while the community has welcomed the additional revenue and cultural prominence, it has often been downright hostile to these new attitudes. The prevailing opinion often seems to be: Feel free to buy our games, but do not presume to suggest that anything should change.