As if MMOGs like World of Warcraft and Second Life weren't already addictive enough, imagine if those virtual worlds crossed over into your real-world life.

No, not like missing your kid's soccer game to raid Serpentshrine Cavern - I mean interacting with computer-generated avatars in a real-world space. For the last two years, faculty and students at the Georgia Institute of Technology have been conducting experiments into enhancing MMOG environments with "augmented reality" (AR) technologies. Mowing down murlocs on your morning commute has never been so tantalizingly close.

What sets AR apart from traditional (and clichéd) virtual reality? The latter refers to an artificial, interactive environment where everything that the user sees and hears is computer generated (or synthetic). "Augmented reality" refers to overlaying (or "augmenting") a real-world object or environment with computer-generated content for the user to interact with. The user sees the virtual elements blended into their real-world surroundings by either looking at a screen or wearing a head-mounted display.

The AR Second Life project at Georgia Tech interfaces Second Life client code with AR technologies. One of the project's experiments brings avatars out of the virtual world of Second Life and into the real world to interact with real people. Imagine wearing a head-mounted display and checking out that sexy avatar you've had your eye on standing right in front of you in life-sized form.

The Escapist sat down with Blair MacIntyre, an Associate Professor at the Georgia Institute of Technology and one of the project leaders of AR Second Life, to talk about how AR technology might change how we communicate - and play

The Escapist: Practically speaking, how can augmented reality technology benefit the user/player in an MMO environment, or enhance the gameplay?

Blair MacIntyre: Imagine a global-scale MMO. Imagine going into Google Earth, and you could author an overlay on it. So now I could be walking down Broadway in Google Earth and someone who's standing on Broadway in New York would be able to look at their see-through display and see me walking down in exactly the same aligned perspective.

There's all kinds of gaming applications: Maybe a fantasy roleplaying game where I'm looking at a representation of Times Square and I'm fighting the dragon over it, and people in Times Square, through head-mounted displays or their cell phones, see this unfolding. So you can start imagining games that align the physical and virtual worlds in large-scale experiences. 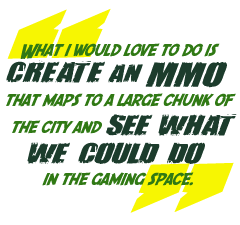 Sun has this MMOG [toolkit] called Wonderland. We have a full-scale model of the [Georgia Tech] campus and a 16-mile stretch of Peachtree Street near campus that one of the groups on campus built. What I would love to do is create an MMO that maps to a large chunk of the city and see what we could do in the gaming space.

TE: What were the goals of the AR Second Life project when you started research and development?

BM: The initial goal was to explore augmented reality [in] machinima ... going from what people have been doing in the machinima world, which is analogous to animated films, and moving into having the ability to put virtual content, virtual characters and so on, in the physical world.

As Seen on TV Sinan Kubba 37 Comments
Comments on