The delegates discovered their "guinea pig" status themselves when they realized how little guidance the charter actually provided. In the month between their election and their scheduled trip to Reykjavik, they had to settle a number of procedural issues before deciding upon their proposals to CCP. More than one heated dispute arose over intentionally vague language in the CSM charter - Petur provided a loose framework and let the delegates decide the rest. To Andrew Cruse, a 39-year-old technical writer from West Sussex, England, and the CSM Chairman, "They're partially deciding a council, partially having a sociological experiment in the virtual equivalent of the Big Brother house with spaceships."

It's not just the interactions within the council - made up of players with completely different interests and play-styles within the world of EVE - that are unpredictable. The effect that the CSM can have on the development process is still unclear. While the elections were held under the pretext that the player-base would have a greater say in ongoing game balance and design issues, the Council charter explicitly states that the CSM holds no official power within CCP. But, Dr. Eyjo says, "we would not do this if we did not want to listen." 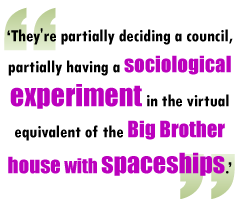 How much they want to listen, however, is still up for speculation. Just as the CSM delegates have different goals for their office, they sensed conflicting opinions on the part of the CCP council as well. Alison Wheeler, a 52-year-old executive at a London-based strategic consulting firm, sees some reluctance on the designers' part to give any clear indication of whether the CSM's proposals were feasible, let alone if or when they'd make it into the game.

"I'm not totally sure yet how much agreement there is between CCP management and CCP development teams. They've opened this can of worms up that said, 'These people get elected by other pilots and players, they have the right to say, "We want this to happen; please make it so!"'"

For the designers' part, there are definite risks involved in allowing players without prior knowledge of the development process to dictate any part of the schedule. Lead Designer Noah Ward feels it's CCP's responsibility to educate the CSM about the development process, both for their benefit and to pass on to the player-base. "Unless you actually work in game development or some other form of software development, it's kind of a black art," Ward says.

This is perhaps partly why the CCP council openly expressed disappointment after the first day of meetings when the CSM proposed an array of small changes to EVE's user interface. The CSM felt these changes would have the greatest chance of improving the experience of the most number of players, regardless of their allegiances or interests. The CCP council thought they were wasting their time.

"A lot of their issues were kind of on the 'tactics' level, it was like, 'We want you to do this, change it like this,'" Ward says. "I'd like to see more 'strategy,' to see them say, 'We would like to go here in a year from now, and can you make it happen?' And I think we can do it. I just think it needs to be communicated to them, and as CSM evolves, we can have this. Because it's the players' game, and I think this democracy is just going to make things all the better for the players."