Most of us are familiar with the Rock Star Developers, the elite group of game designers we quietly idolize. Miyamoto might be the Bowie of the bunch, boasting a catalogue of wildly fantastical gems over his 30-plus-year career. Cliff Bleszinski shares Noel Gallahger's talent for crafting punchy sound bites that occasionally overshadow the actual product. And when Spore is finally released, Will Wright will certainly be bigger than Jesus.

Then there's Tim Schafer. More Mark Mothersbaugh than Mick Jagger, Schafer has built a reputation for creating weird, cerebral games that rely more on clever dialogue and witty characterizations than seat-of-your-pants gameplay. Beginning his career at LucasArts with The Secret of Monkey Island, which he helped write and program along with fellow designer Dave Grossman, Schafer has carved out a niche in an industry obsessed with the next Top-40 hit where he and his team can work on something a bit more offbeat.

In 2005, it was Psychonauts, an "adventure platformer" developed by Schafer's studio, Double Fine Productions. Reviewers were equally blissed-out and bewildered; Official Xbox Magazine gushed that "the world of Psychonauts is the most inventive, creative, and downright visionary that's ever graced a videogame," while Games Radar UK lamented that the gameplay was "on the verge of going stale." It topped plenty of critics' year-end "Best Of" lists, but compared to titles like God of War and Resident Evil 4, sales didn't match the press' effusive praise. Schafer, however, has a different outlook.

"In some ways, that has been a little overstated. Our games have always done fine ... of course, we didn't sell as much as Halo, but I wouldn't describe any of them as flops at all," Schafer says. "Sometimes, I think our fans actually prefer the 'flop' version of the story though." 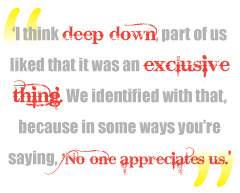 "It's like, when I was in high school, I really liked the Ramones, and it was me and just this one other girl in the whole senior class who liked the Ramones. We would talk about it like it was a secret club when everyone else was listening to Journey. We'd always say we wished they were bigger. But I think deep down, part of us liked that it was an exclusive thing, like only we appreciated them. We identified with that, because in some ways you're saying, 'No one appreciates us.'"

Perhaps it's Schafer's uncompromising vision that inspires such devotion in his fan base. When Microsoft Game Studios, originally slated to publish Psychonauts, began showing concern about the game's direction in 2004, Schafer only became more insistent. "They were just like, 'We don't get where this is going; we don't think the builds are fun, and what's going on?' And we were like, 'No, you don't understand, this is going to be this way, and this is going to be that way, and these parts aren't fun because we aren't working on them right now.'" Microsoft eventually dropped the title in March, before Majesco signed a deal to publish it later that year.