Magic: The Gathering just celebrated its 15th anniversary. It's awarded millions of dollars on it's Pro Tour. But its greatest accomplishment was also its first: It launched an entirely new type of game, collectible card games (CCGs.) Mash the addictiveness of trading cards with the strategy and competitive spirit of chess and you're certain to find something amazing.

There are three people who have built their reputations on the franchise. One is the head of its research and development team. The second is its champion, the name every competitive player knows. And the third is our story's "villain."

Mark Rosewater got a degree from Boston University before going on to pursue a career in television as a writer. He served as a staff writer for Roseanne and is even credited with two episodes. How, then, did he become the head of R&D for the granddaddy of all CCGs?

In 1994 Rosewater began doing some freelance work for Wizards of the Coast, the creators of Magic. Largely he came up with Magic puzzles that Wizards of the Coast ran in their monthly magazine, The Duelist. In 1996 he began working on Magic full time. He still consistently writes the longest column on the Magic: The Gathering website and shares insights into the R&D and design process.

While he joined Wizards in 1996, it wasn't until 2003 that Rosewater ascended to the throne of Lead Designer and publicly took the helm of the game. His job, in his own words, is to make the game fun through a mixture of passion, energy, excitement and a bit of kookiness. He insisted on a joke in the latest block of cards revolving around goats. (It's had little impact on the game, but he felt very strongly that it would enhance the game for a certain group of the game's fans.) Only a person who is as deeply involved in the game and its community could take the risks that Rosewater has.

Regularly he tells his column's readers that he is an avid follower of unofficial Magic writings elsewhere on the web. He strives to be the most connected and aware follower of the game out there. It is his livelihood, and if he doesn't keep his finger on the community's pulse, his job could be on the line. 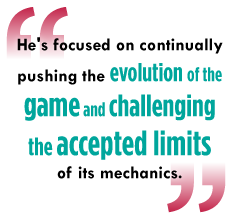 Since he's assumed the lead position, the game has taken several sharp turns in its development. These changes have been scrutinized and criticized, but so far they have turned out for the best. He's always looking for new design spaces that the game can explore, never letting the game stagnate. In fact, he's focused on continually pushing the evolution of the game and challenging the accepted limits of its mechanics.