It's inevitable: You're going to die. I'm sorry to break this to you. I wish it weren't so.

Death is the one inescapable truth of our existence; no matter what else can be said of us, whatever else we may or may not accomplish, we are all, at some point, going to die. 150,000 people do it each day. That's more than the population of Topeka, Kansas.

That we'll die is certain. The only questions are when and how. 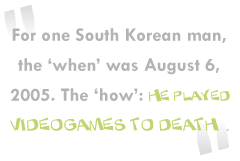 "We presume the cause of death was heart failure stemming from exhaustion," a Taegu provincial police official told Reuters.

For three days Lee played StarCraft in a public computer cafe in Taegu, South Korea. He left his computer only to use the washroom, sleeping nearby on a makeshift bed.

Lee had recently quit his job in order to spend more time playing games, presumably so that he could eventually "go pro" and compete in South Korea's popular gaming competitions. It was a life choice that would ultimately prove fatal.

Sadly, this case is not an isolated one. Rare, perhaps, but not unique. Three years before Lee's heart succumbed to the Zerg rush, another Korean gamer, Kim Kyung-jae, shuffled off his mortal coil on the toilet in a gaming cafe in Kwangju. Kim had been playing Mu Online for 86 hours straight. The official cause of death: deep-vein thrombosis.

It's a horrible condition, for sure. Prolonged inactivity impedes bloodflow around your body, causing clots to form in the deeper veins - usually the legs, but occasionally the arms as well.

Having the clot at all is bad enough, but it can become dislodged and travel through the vein and rest near essential organs such as the lungs, massively increasing the chance of pulmonary embolism.

Kim had apparently collapsed just prior to visiting the toilet, sensing, perhaps, he needed to take a break. Unfortunately that realization dawned far too late to save him. He was 24 years old.

Gaming, it would seem, is a dangerous hobby in Korea. Yet not so dangerous as in Shanghai, where, in 2005, Legends of Mir 3 player Zhu Caoyuan expired after a violent confrontation with his associate and fellow gamer Qiu Chengwei. Cause of death: stabbing.

In February of that year Chengwei acquired a powerful in-game item called a Dragon Sabre. He then loaned the sword to Caoyuan who promptly sold it and pocketed the cash. Chengwei, frustrated by his associate's betrayal, visited him in person to register a complaint, then stabbed him. Officials called the resulting blow "forceful."

Chengwei later turned himself in to the police who, he claims, had been alerted to the in-game theft prior to the confrontation but failed to respond. If only Chengwei had lived in South Korea. In 1995, South Korea established a national cyber crime police force, which now spends roughly half its time tracking thefts and other crimes in virtual worlds. China has no such task force. They do, however, have laws against murder. Chengwei is currently serving a life sentence.