Read enough of these stories and Asian gaming culture begins to look a lot like a wasteland of humanity, where hollow-eyed strangers, with little more to lose than their lives, sell their bodies and souls for a few hours of feeling good. Digital junkies cooking virtual meth in an online trailer park. All that's missing are the starving dogs chained in the yard and the neglected babies dying in their cribs. Wait, scratch that last one. They've got those.

"We were thinking of playing for just an hour or two and returning home like usual, but the game took longer that day," said one of the parents of a South Korean infant who, in 2005, died in her crib after her parents abandoned her for several hours to play World of Warcraft at a gaming cafe. Cause of death: suffocation.

The initial reaction of many Westerners - or perhaps anyone - reading these accounts might justifiably be: "What the hell is wrong with these people?" Professor Mark Griffiths provides a possible explanation:

[These] are not games that you can play for 20 minutes and stop. If you are going to take it seriously, you have to spend time doing it. ... They are the types of games that completely engross the player.

So gaming, for some people, is a task so serious as to require vast amounts of time and/or energy and which they take as seriously as some folks take their jobs. Got it.

Griffiths continues: "It does seem to be the case that online gaming addiction for a small minority is a real phenomenon and people suffer the same symptoms as traditional addictions. But the good news," he says, "is that it is a small minority."

So they take it seriously and are, perhaps, addicted. Right. But in South Korea it goes a bit deeper than that. In South Korea, as my colleagues writing in this issue of The Escapist have pointed out, gaming isn't just a seriously addictive hobby, it's a way of life. 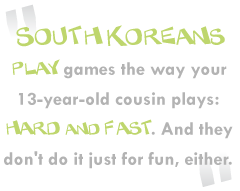 In 2005 over 30 percent of South Korea's population played online games, and not just in the "slamming down a few games of Solitaire while watching the clock" way that a third of U.S. citizens play. South Koreans play games the way your 13-year-old cousin plays: hard and fast. And they don't do it just for fun, either.

Three cable channels are devoted to broadcasting game matches and a total of 4.5 billion won ($4.4 million) is given out as prize money in competitions each year.

Even the government is embracing electronic sports, or "E-sports," funding construction of the world's first e-sports stadium, to be completed by 2008, where online competitions will be displayed on huge screens.

Hong Jin-ho, a 24-year-old professional gamer, earns more than 133 million won ($130,000) a year, living and training with his fellow game team members in an apartment in central Seoul.