Point being, it could happen to anyone, anywhere. Deep-vein thrombosis, heart attack or even, one supposes, murder. Games are just the catalyst. As responsible as the weather, or what's playing on the television.

People die all the time. Death is, after all, the one thing we can all be assured we will experience. What makes these gaming deaths remarkable is the fact the deceased all perished doing the thing they truly loved. Of all the ways to die, surely there are worse than gaming. 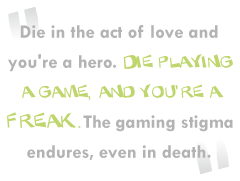 That we die is not newsworthy, but the manner of our death, along with the date and that of our birth is all that will ever be recorded about most of us. And unless we croak while getting lucky in the workplace or in a gaming cafe, our 15 minutes of fame will be more like 15 seconds, buried six sections under the headlines on the obituary pages.

Can we equate playing videogames to skydiving, boating or sex? Expiring from exhaustion, heart attack or DVT from playing a game for three straight days to accidental death while pursuing a leisure activity? Aren't the two the same thing? Die in the act of love and you're a hero. Die playing a game, and you're a freak. The gaming stigma endures, even in death.

According to the latest census information, Americans spend, on average, about four hours a day watching television and up to as much as a quarter of our waking hours. Imagine the headlines in Korea about dead Americans.

Russ Pitts hopes to die in a fiery explosion, after driving over a cliff at a high rate of speed, in a fire engine red Ford Torino. His blog can be found at www.falsegravity.com