Envision an alternate reality we might call "Gamer America."

In Gamer America, every home and office has 20MB/s broadband that's cheaper than milk. Everywhere that real America has a Starbucks or a fast food restaurant, Gamer America instead has LAN hangouts where, for a buck an hour, you can play online 24/7 with all your friends and socialize with the opposite sex. The coolest kids in Gamer America high school go out for the StarCraft team. Gamer America's Commerce Department heavily funds a Domestic Gaming Agency to promote games to your mom and your grandma and the world. And there's a Gamer America network TV channel (not cable, network) broadcasting online game tournaments round the clock. No, wait, there are two channels.

Sounds like an EverQuest fever dream? A console fan's Robitussin high? Okay, Gamer America doesn't exist - in America. But it lives for real - right now! today! - in the Republic of Korea (RoK). 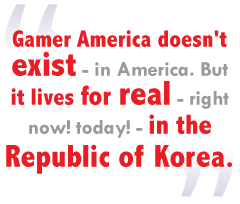 Land of the Wired Baang
Most urban South Koreans live in apartments the size of a walk-in closet, and some may eat nothing but 200 kinds of kimch'i, but they are truly, deeply wired. They don't use the term "broadband" because there is nothing else. They can get a 100-megabit DSL line for $20 a month. The internet streams glass-smooth HDTV and better-than-MP3 music on demand. Korea's Daum.net, a hydra-headed Yahoo!/eBay/Amazon/PayPal/Blogger/ Skype monster, is one of the world's most popular sites, despite accessibility limited only to those who understand the Korean language. The online community Cyworld.com (sort of a Friendster/MySpace/Blogger/ IRC/Flickr) has pulled in a fifth of all South Koreans, including 90 percent of all Internet users aged 20-29.

And everywhere, there are the PC baangs - twenty thousand of them.

A PC baang (pronounced "bahng," "room") is an information-age temple with two or three dozen computers on a fat-pipe network. They all sell computer time by the hour, along with terrible coffee and (for those long gaming sessions) ramen noodles. Under bad lighting, in air gone blue with cigarette smoke, amid an insanely loud thrum of spellcasting and explosions, young and old men sit in Aeron-knockoff chairs. They're downloading bootleg movies in the background and maybe Skyping with friends in Hong Kong or Taiwan, but mostly they're playing Lineage or Ragnarok or a horde of smaller online games like Shot-Online (online golf), APB (cops vs. gangs), and Wiki (time-traveling quests around a World Tree - oh, that old cliché).

Fans devoutly track the tactics of celebrated media stars like Lim Yohwan (SlayerS_BoxeR), two-time winner of the World Cyber Games, who has released a DVD of his best games with commentary; Lee Yunyeol ([Red]NaDa), the "Tornado Terran"; and the current #1 player, Choi Yeon Sung (IloveOOv), who won the MBCGame Starleague an amazing three times in a row. The Korean scene draws foreigners as well. Daniel "Rekrul" Schreiber, one of America's best StarCrafters, moved from Ohio to Seoul to play professionally, but then found greater success there playing poker.

With the rise of broadband, Korea's PC baangs have declined from their height in 2000, when there were 50,000 of them for a nation of 50 million people. But gaming is still titanically strong in the Gamer Nation. Tens of thousands of people attend tournaments. Online games have three times the market share of PCs or consoles. Seven online publishers pull in $80 million annually, with 40-50% profit margins, and a dozen more hum along nicely at $30 million. Hundreds of companies "farm" virtual property to resell for actual money. Some Korean MMOGs even connect to the physical world: Players use an SMS gateway to send text messages to their teammates' cellphones.