Of course, there is an in-game explanation as to why the Evokers resemble guns. In the episode "The Answer" on the FES edition of P3 the character Akihiko says at one point : "To tell the truth, I thought that girl [Mitsuru, another character in P3] was crazy until I first summoned my Persona. What was I supposed to expect when you gave me what looked like a gun five minutes after meeting me?" To which the character Mitsuru replies, "All part of the plan. ... That was the best way I could think of to get your attention. If I'd asked you to do something like 'fight for justice,' I knew you'd never listen." 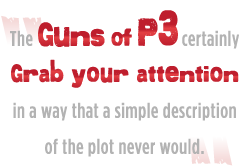 Considering some of the themes present within the game - especially those that come up near the end - maybe I'm onto something. After all, the guns of P3 certainly grab your attention in a way that a simple description of the plot never would. As many Japanese console RPG players can relate, plots often consist of "existential retreads" (as webcomic Penny Arcade calls them), waxing poetic about the human condition, babbling on about the "fate of the world" and all that cliché nonsense. However, even though P3 has the trappings of a traditional JRPG, the game explores themes that players might otherwise miss if the characters didn't shoot themselves in the head.

For example, there's the Social Link system in the game that keeps track of your interpersonal relationships and how strongly connected you are to your friends and acquaintances. This mechanic is anything but superficial - the stronger your bonds are with other characters, the more powerful Personas you can create. At the end of the game, the characters with whom you've made the strongest bonds call out to you and lend you their strength, allowing you to seal the end boss away for good. It's a life-affirming message: that partaking in society can give your life more meaning - and further improve your mental fortitude - than being a recluse and shunning your fellow human.

There's also the fact that the main antagonists of P3, the Shadows, most often prey not on the physical bodies of humans, but their minds - as mentioned before, they suck out their victims' brains (figuratively speaking), leaving them living corpses. It's peculiar that this would be the M.O. of the main antagonists, especially because the game refers to the victims of the Shadows as sufferers of "apathy syndrome." At one point, Ms. Toriumi, your homeroom teacher in the game, says that the apathy syndrome is a result of a "hopeless society." Perhaps it's a commentary on the mental maladies that plague our modern, industrialized culture.