It had been a long night, and I was feeling much wearier than my elven minstrel looked. He was apparently tireless as he whipped out his theorbo, played a ditty, and returned it to its infinitely capacious yet invisible holster. I, on the other hand, was literally falling asleep in the middle of battles, hardly noticing when the guardian's morale dwindled to a hair's breadth. 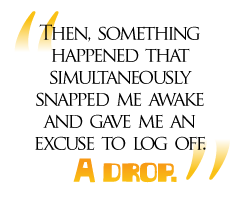 Then, something happened that simultaneously snapped me awake and gave me an excuse to log off. A drop. A page drop. The last page of The Rising Chord, the legendary book I'd been working towards completing for the past month. The one that would give me the legendary trait that would give me the skill that would allow me to mitigate dread for my fellowship. Euoi! Add that to a mirrored shield my friend had crafted for me earlier in the day, and I was ready for prime-time end-game content! Rift, here I come!

What I was feeling - the mixture of pride, relief and anticipation tied to the lengthy pursuit of an imaginary object - is something that players of MMOG's (and, truth to tell, several other kinds of videogames) know very well. But it isn't something that came into existence with the current crop of MMORPG's and their highly developed grinding and loot mechanics, nor even with paper-and-dice RPG's and the Vorpal Swords that lurked in the pages of the Dungeon Master's Guide. The feeling is probably as old as storytelling itself, but its first obvious appearance in Western Civilization is in Homer's Iliad.

Here's Hector, in Book 17, getting the drop of Achilles' loaned armor from Achilles' friend Patroclus:

But Hector, when he had stripped from Patroclus the glorious armor,
dragged at him, meaning to cut his head from his shoulders with the sharp bronze,
to haul off the body and give it to the dogs of Troy; but meanwhile
Ajax came near him, carrying like a wall his shield,
and Hector drew back to the company of his own companions
and sprang to his chariot, but handed over the beautiful armor
to the Trojans, to take back to the city and to be his great glory.

And here's Menelaus, a bit earlier in the same scene, worried that Hector is going to get that drop:

Ah me; if I abandon here the magnificent armor,
and Patroclus, who has fallen here for the sake of my honor,
shall not some one of the Danaans, seeing it, hold it against me?

3-D graphics and tiered chat interfaces may lend an air of novelty to the quest for loot, but classical literature tells us that gear drops - and the strong feelings associated with them - are a very, very old phenomenon.