Think of the Achaean warriors (the ones we usually call "the Greeks") at Troy, and the Trojan warriors (led by Hector) themselves, as toons at the level cap. The most important gameplay mechanic for the Achaeans and the Trojans is called aristeia. Call it "prowess" if you want, but it really means "best-ness." In this context, Aristeia is a kind of mini-game all its own. The internal evidence of the Iliad suggests that this mini-game is actually the ur-genre of the epic tradition, the earliest and most basic development of oral bardic convention that ended up giving us the written fossil we know as the enormous, 24-book masterpiece called the Iliad.

To put it in concrete terms: In the period around 1200 to 800 B.C.E., bards traveled from noble house to noble house. In each house where the lord fed them, they sang stories of the glory of heroes. Those stories weren't very long, and they weren't very complex. One kind of story that seems likely to have been really popular is the aristeia. The aristeia records a hero's fighting abilities by telling of a battle in which he killed multiple opponents, usually ending in an encounter that's identifiably a "boss fight." 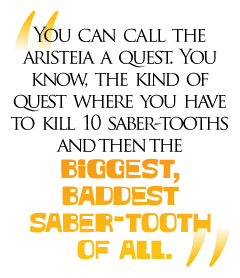 You can call the aristeia a quest. You know, the kind of quest where you have to kill 10 saber-tooths and then the biggest, baddest saber-tooth of all. (It's also reminiscent of a level in your standard action game, but remember, we're looking for loot, not just an afternoon's diversion.)

This kind of story, where a warrior demonstrates his mastery over his opponents (on a given Sunday, as it were), foretells the development of the Iliad into the masterpiece we know today. When Achilles pulls out of battle, there wouldn't be any questions about the significance of the act for Homer to ponder unless Achilles was the best of the Achaeans. And Achilles couldn't be the best of the Achaeans without the aristeia to prove it.

The aristeia itself also looks backward to an even older tradition: the battle books proper, in which heroes kill one another without an immediate purpose beyond stripping their opponents' armor and giving it to their driver to take back to their tent. It's worth noting that chariots are a ridiculous anachronism in the Iliad - almost as ridiculous as the idea that you might actually carry all that crap in your bags in an MMOG (or, again, any game with an inventory).

The battle books are the closest the Iliad comes to grinding. Warriors and warrior wanna-bes must have loved these stories. Ancient Greek bloggers with aesthetic pretensions, on the other hand, must have had a love-hate relationship with them. After all, there's something about grinding that's incredibly engaging. Far from extraneous, grinding is an unbelievably good way to learn how to play the game. The battle books, and their development into the kind of quest called aristeia, display an amazing quality that comes entirely from an unexpected source: the way the grind and the quest, with their common outcomes of experience and loot, demonstrate the MMOG player's suitability to function in a group.