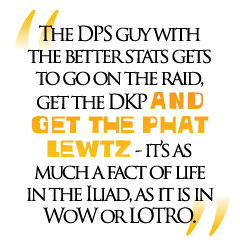 Achilles is the best of the Achaeans at Troy - the go-to DPS guy, with the perfect min-max gear. When Achilles opts to sit out because his guild leader Agamemnon decides to take away a piece of Achilles' phat lewtz even though Achilles had spent the DKP to get it (see Book 1 of the Iliad - the fact that the loot is a girl just means that even Age of Conan doesn't really approach Greek epic for adult content), all of a sudden the grind, the quest, and the gear mean much, much more. All of a sudden, we have something we can call ethical critique. All of a sudden, we have meaning.

It's partly because of the idea of aristeia - of being a really good warrior. But prowess and excellence only finally have meaning - in the Iliad, in games and elsewhere - because they put heroes up against one another. The DPS guy with the better stats gets to go on the raid, get the DKP and get the phat lewtz - it's as much a fact of life in the Iliad, as it is in WoW or LOTRO.

That's because there's something we can call "polyheroism" in the Iliad. It's pretty much like a five-man group in WoW, or a six-man fellowship in LOTRO: Achilles is the DPS guy, Ajax is the tank, Odysseus is the rogue, etc. To enact a story about the meaning of excellence, you need to be able to compare heroes. Everyone loved Achilles, just like everyone loves a good, well specced champion. But some people like Odysseus better than Diomedes, just as some people would rather have a burglar in their party than a second DPS class.

I'm not saying that RPG classes have the depth of epic characters (though you'd be surprised by how little depth epic characters actually have). I'm saying that one important function of characters in the Iliad and in MMOGs is to get us to think about how different versions of excellence relate to one another.

Gear isn't quite the fundamental, all-pervasive mechanic in the Iliad as it is in MMOGs. But in its own way, it's actually much more important in epic tradition. Patroclus begs Achilles to let him wear Achilles' armor. When Patroclus advances too far in battle, Hector slays him and strips the armor (best epic drop ever). Achilles declares that he will return to battle, so his mother commissions a new set from the god Hephaestus (best crafted gear ever). On the shield is depicted, through the skill of the god and the skill of the bard, the entire world.

With that set buffing him to unimaginable min-max heights and depths, Achilles goes out and encounters Hector (now wearing Achilles' old gear) and slays him, sealing his own doom and winning the war for the Achaeans. From that perspective, at least, it's all about the gear. And when we consider Achilles' phat lewtz alongside the little stories that take shape every day on guild discussion boards, when the tank refuses to go on the raid because the healer is a jerk and refuses to spec correctly, we see the wrath of Achilles played out over and over.

When my minstrel finally got the last page of The Rising Chord, it wasn't particularly profound. Nor was the mirrored shield an artistic wonder, despite its incredible stats. But knowing that when we venture into the Rift my theorbo will ring out with the greatest possible excellence gave me pleasant dreams of glory. Someday, The Rising Chord may be a book worth reading, but even now I have a better understanding of my worth, both min and max, for playing, and living, alongside my friends and fellow warriors.

Roger Travis is Associate Professor of Classics at the University of Connecticut. He blogs about the interference of Classics and gaming at livingepic.blogspot.com. In Spring 2009, Roger will offer an online course on videogames as a reawakening of Homeric epic.