A Brit currently working as a software developer in Dubai, Gemasis records most of the site's videos himself. He often starts playing at 6 in the evening only to finish at 4 in the morning. The dude barely stops to rest, but his loss of sleep is our gain. The Hand Vs Eye first appeared in 2005 and focused mainly on Devil May Cry 3. It had good core content, but updates were scattershot and the site eventually folded after a year and a half. "It was, dare I say, casual," admits Gemasis.

He revived the site earlier this year, showcasing Devil May Cry 4, but incorporating high-level vids from other games too: Metal Gear Solid 4, Dark Sector, Haze, even Ninja Gaiden II. A single ethic unites these video projects: "Whatever game we do, we'll do it at its hardest difficulty," he says. 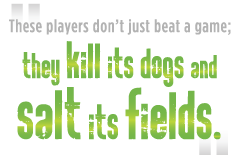 The work of hardcore players like Gemasis' on display at The Hand Vs Eye and iberiansngrealm.com is the ultimate schwag. These players don't just beat a game; they kill its dogs and salt its fields. They make me want to do the same.

Playing hard games on hard difficulties is exhilarating. Pushing through NGII on "Mentor" - its "very hard" setting - I find my eyes bugging out and sweat pouring down my sides. I chew my lips like a speedfreak. And when I'm not dying from some cheap-ass rocket fired from off-screen, I look awesome. One of the paradoxes of high-level play is that you can sometimes pull off cool-looking combo attacks more easily on harder difficulties. On low settings, enemies die too quickly for the player to kill them with panache.

Crazy nuts like Sneh and Gemasis attracted me to this brand of play - and they showed me how to achieve it myself. Even better, their instruction comes free both for me and for game makers. Or, rather, it's free for those developers and publishers who invest in content that draws the hardcore crowd. Yes, hardcore players may consume fewer games than casuals, but they more than make up for their rarefied tastes by publicizing the games that satisfy them. We could call this arrangement the Hardcore Survival Pact.

This pact also holds for the kind of people who would get a joke like the one Itagaki made in NGII's opening sequence. They're hardcore, too. Obsession is the definitive aspect of hardcore gaming, and it comes in many forms. There are as many ways to beat a game to death as there are to skin a cat. It's just as compelling to discover a detailed, earnest analysis of why all the protagonists of Devil May Cry look exactly the same, as it is to check out the heights of the leaderboards. They both indicate that there's a huge, complex, vibrant world that you can tap into by picking up the game.

I know I'll never put up a top score in Ninja Gaiden, nor write a FAQ for it, nor post a video of myself playing it. But as long as guys like Itagaki season their games with egomaniacal grandstanding, I'll be there to point and laugh. That's my hardcore contribution to the continued health of gaming, my come-hither wink to those shy and giggling casuals.

Ray Huling's a freelance journalist in Brooklyn. He can't wait to escape from New York back to Lovecraft Country.