For the past seven years in Afghanistan and Iraq, the United States and its allies have fought irregular enemies who eschew traditional military confrontation in favor of asymmetric tactics. These wars have been costly, painful and, consequently, highly controversial, both within the military and among the public at large. More than most other areas of popular culture, videogames have demonstrated awareness of their historical moment, as the plethora of military shooters and dystopian plotlines can attest. But thus far, games have avoided engaging the real-life issues to which they are responding. 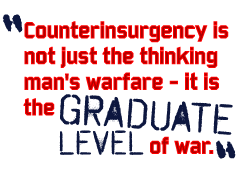 The wars we read about in newspapers are counterinsurgency and stabilization operations. The U.S. Army/Marine Counterinsurgency Field Manual devotes its first chapter to laying out the complexities of this type of warfare, and explaining why one U.S. Special Forces soldier said, "Counterinsurgency is not just the thinking man's warfare - it is the graduate level of war." The enemy forces are fragmented and unpredictable, the host countries are riven by ethnic, sectarian and tribal divisions, and military objectives are inseparable from political circumstances.

Videogames portray wars of a simpler nature. Call of Duty 4: Modern Warfare, to use one prominent example, evokes today's conflicts but shies from their substance. Enemy soldiers fight conventional battles, dying by the thousands as they come out of hiding to the waiting guns of the American and British militaries. Little has changed between this game its World War II predecessors, save its style and production values. War games are even more conspicuous in their avoidance of unconventional conflict, both contemporary and historical. The genre almost exclusively portrays combat between state-sponsored armies on battlefields where civilians are irrelevant or absent. The videogame battlefield is increasingly antique and simplistic compared to its real-life counterpart, which has only grown more complex and challenging in the last half-century.

That's a disappointing silence coming from a medium that could so effectively illuminate issues that often generate far more polemic and posturing than useful discussion. A good, thoughtful game can lend understanding and coherence to conflicts both past and present in ways that other media cannot.

In Persuasive Games, Ian Bogost explains that videogames can raise and discuss truths and concepts that are too easily obscured in more traditional communication. He writes, "Political videogames use procedural rhetorics to expose how political structures operate, or how they fail to operate, or how they could or should operate. ... By playing these games and unpacking the claims their procedural rhetorics make about political situations, we can gain an unusually detached perspective on the ideologies that drive them." In this way, gaming can provide a respite from the shrillness that characterizes so much of political life, and it can be a place where policy issues once again become challenges to discuss and puzzles to solve, rather than ideological cudgels.

Letters to the Editor: Boot Camp The Escapist Staff 0 Comments

Not All Fun and Wargames Alice Bonasio 6 Comments