Voice One: Rudy
A young woman's behind presses into my crotch; a businessman's shoulder cuts into my armpit. Her coarse hair, smelling of shampoo, brushes across my face; his breath, reeking of sour milk, creeps up my neck. Meanwhile, my freckled cheek is flattened against the foggy, fingerprinted window of the train door, unable to tell whether the condensation is water or sweat.

Then the train stops at Urayasu, and even more suited businessmen get on, the last few reaching inside the doorframe to get enough leverage to wedge themselves in. A bell on the platform signals the door is about to close, and a guy wearing white gloves and a blue Tokyo Metro windbreaker pushes the last passenger into the cabin. Shoes scrape and heels click as people inch deeper into the car. There's a platform announcement in Japanese, the doors slide shut, the train accelerates with a hum and then there's no sound but clacking tracks, sniffling and someone else's iPod.

Now I can feel my cheekbone against the glass, and a strand of the woman's hair makes my nose itch. I can't push it away since my hands are pinned at my sides, but that's okay - I like it.

In the shuffle, my right thigh has somehow found its way between both of hers. They're warm. I shift my weight a little bit, and my right arm presses between her breasts. They're warm, too. Then the train hits a bump, and she presses up against me so hard I can feel the underwire of her bra. 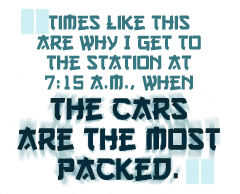 Times like this are why I get to the station at 7:15 A.M., when the cars are the most packed. I ride from the suburbs all the way into Tokyo Station, then turn right around and ride back to my apartment to get ready for work in the afternoon. Sometimes I get caught in the middle of the car and hoisted up, pinned between backs and shoulders and bags, and my toes barely touch the floor. I like those times too, especially after the train's gone underground - then I'm floating, anonymous, in a small steamy world, close to people I can imagine would like me if I spoke the language.

If this were back in Boston, the woman pressed against me now might chuckle and ask, "So, what do you do in the city?" And I couldn't lie or pretend I didn't speak English. After hearing the truth she would squirm, scowl and get off at the next stop, even if it wasn't hers. But here no one asks, because no one thinks I can understand, and so everyone leaves me alone.