Deep down inside, Dave shuddered. Skazz was about to speak.

It wasn't that Skazz was a bad person. In fact, he was one of the best people Dave knew. The problem was that Skazz entered every conversation like he was trying to win an Academy Award. He was a lanky 17-year-old with ridiculous dark blue hair - the academy would be decidedly unimpressed.

"The problem with games these days is that they're too social," Skazz said, and sat down.
"Too social?" Dave scratched his head and stared down at his cafeteria french fries.
"Yes," Skazz said, tenting his hands. "Far too social."
Dave smiled. "Why's that a bad thing?"

Dave shrugged. "It's all fun - what does it matter in the end?"
Skazz glared at him. "It isn't pure fun. It's watered down, forcing people to play together, while trying to teach you at the same time." 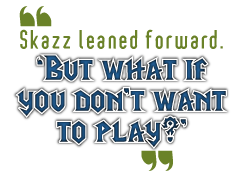 Skazz leaned forward. "But what if you don't want to play?"

The idea seemed foreign to Dave. "Hey, man, everybody wants to play. Online does everything better than real life." Dave swallowed. "We should be getting to class. We're supposed to be talking about the online Hamlet today." As he stood and pulled on his backpack, he could feel Skazz's gaze burning into the back of his skull.

Dave frowned at Steve and sheathed his longsword. The field before them was a brilliant emerald green - and also completely empty.

Steve stroked his bow. "Then the old crone was lying."
Heather, her long robes swaying as her blonde hair tossed in the wind, tapped Dave on the shoulder. "Is there anything here?"
Dave shrugged. "Maybe there's a cave somewhere in the valley."
Heather sighed. "I gave up a night of sex in the harem sim for this?"

"Hey," Dave said, "We need you, hot stuff. What happens if we get attacked by orcs, or even worse, demons? Where will we be without our sorceress?"

Heather grinned. "Okay, but just for you Dave. And you owe me big time for this - you're going to have to do me yourself in the harem tomorrow night."