Dave struck a theatrical pose, his hand on his forehead. "Oh very well, gentle maiden. I guess I can do that, since I haven't gotten laid online for a while."
"Once you two lovebirds have finished, shall we see what's in this field?" Steve said. "Seriously, one day you two need to get a room, for real."
Dave laughed. "I think-" 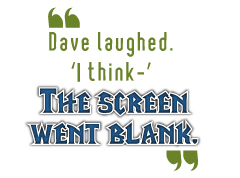 He sat back in his chair, stunned. That had never happened before! He checked the power.

He began to sweat. It was a virus. It had to be. Nothing else could make his computer turn itself off like that. He reached over to turn it on, and then paused. If it was a virus, then he might only be making matters worse.

The phone rang. Dave picked it up. "Hello?"
"Dave, what's wrong?" Heather said on the other end. "You just dropped right out of the game."
"The computer turned itself off," Dave said.
"So, turn it back on! We need you in here! I need you in here!"
"It might be a virus," Dave said.

The voice on the other end went quiet. "Oh. You better not touch it, then. You going to call tech support?"
"No," Dave said. "I'll get Skazz to have a look at it tomorrow. The last thing I want is some government techie looking at what's on my computer."
"Well, you get it fixed soon," Heather said. "Besides, you still owe me. I want to see you in that harem tomorrow night."
"Oh, I'll see you," Dave said, putting a lecherous note in his voice. "As soon as Skazz fixes my computer, I'll see all of you ..."

"I can't do it tonight, man," Skazz said.
"But Heather's expecting me," Dave said. "And I've been itching to get onto Aldamar since the crash."
Skazz sighed. "Has it ever occurred to you to take Heather out on a real date? Maybe even have real sex with her?"

Dave stared. "Have you got any idea of how risky that could be? There could be a pregnancy, a disease ..."
"There's this thing called a condom, Dave," Skazz said with a flourish. "You'll have more fun using it than a keyboard."
"I don't want some stranger looking through my files," Dave said. "Please, fix my computer for me."
"I can get to it this weekend," Skazz said.

Dave patted Skazz on the back. "Thanks man. I owe you one." Then he flipped open his phone to give Heather a call.

The first date with Heather felt weird, almost unnatural. Kissing her in reality was awkward, even though Dave had done it, and more, hundreds of times in the harem sim. By the second date, when he was brave enough to touch her and feel her press herself into him, it became easier. By the time they made love on the third date, and he lay beside her in her room, gazing at her body, Dave could not imagine being with her any other way.

They kissed as she walked him home, talking about plans for the future, all in the real world. As they rounded the corner, they were interrupted by voices coming from his front door. Parked across from his house was a official black government car. His parents were talking to four agents in dark suits.