Dave pulled Heather behind one of the bushes and stared at the agents. Straining just a bit, he could hear what they were saying.
"It has now been four days, and your son hasn't logged on," the first agent said.
"His computer was broken, Agent Gedry," his mom said. "His friend Skazz was going to fix it this weekend."
"A friend?" Gedry said. "You are aware that such repairs are to be made by a government-licensed technician. We all know what virus problems there were when repairs were unregulated."
"He's on a date right now," Dave's father said. "When he gets home we can talk to him."
"I think more positive intervention is necessary," Gedry said.

"We'd better talk to Skazz," Dave whispered. "He'll know what to do."

Dave stood up and then cursed under his breath. If he had learned anything in Aldamar, it was how to be stealthy - how could he have forgotten it now, the first time it really mattered? One of the agents spotted him and cried out, pulling out a gun.

Gedry stared him down. Dave could swear he saw the man smile. "We have a runner!"

The agent fired a projectile that zipped past Dave's head. He grabbed Heather's hand and broke into a sprint. with three of the agents close behind. He helped Heather over a fence and then climbed it himself, moving from yard to yard, getting closer and closer to Skazz's house.

Heather stopped and looked behind, trying to catch her breath. "They're not following us."
Dave pulled up, panting as well. "Do you think we lost them?"
"If it's anything like the games," Heather panted, "they'll be waiting to ambush us."
"We've got to get to Skazz's," Dave said. "We'll just have to take the risk. If anybody will know what to do, he will."

They made their way through another couple of yards, Skazz's house just over a fence. They peered through the fence, looking for the government car. Nothing.

"We'd better use the window," Dave said.
Climbing the fence, they crept over to the basement window where Skazz had his "laboratory." Dave could see Skazz working away at something on his computer, but all that was on the screen was text.

Dave knocked at the window, and Skazz glanced up at him, startled. Stepping up and opening the window, Skazz raised an eyebrow. 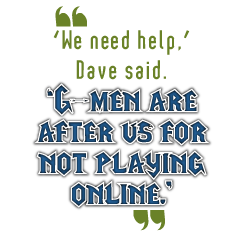 "We need help," Dave said. "G-men are after us for not playing online."
"Is this some kind of joke for not fixing your computer?"
Heather shook her head. "They're chasing us, and they have guns!"

Skazz sighed and removed the screen from his window. "You know, some people use the door."

Dave and Heather climbed in, Heather yelping as she banged her elbow on the ledge. Dave looked at the screen of Skazz's computer.

It was filled with source code.

"I had always wondered what would happen if somebody was offline long enough," Skazz said after Dave finished filling him in, nervously tapping his fingers on his desk. "Now I know."
"But you're almost never online," Dave said.

Skazz grinned. "I'm not. My computer, however, is. I programmed a bot to play for me after I discovered the signal."
"What signal?" Heather asked.