The following is an exclusive excerpt from the upcoming novel Gears of War: Aspho Fields by Karen Traviss, the first in a trilogy of official novels based on the hit shooter from Epic Games, Gears of War.

SOVEREIGN BOULEVARD, JACINTO.
Dom could hear firing long before Delta reached the junction with the boulevard. Marcus broke into a faster run, then sprinted toward the sound.
"He's going to get us killed," Baird muttered, maintaining a steady jog. "Asshole."
Cole gave him a playful shove in the back, which was a hefty blow from a guy built like a brick shithouse. Baird almost fell. "Come on, baby." Cole overtook him. He could still sprint like a pro. "You don't want to get an ugly one."
There was only ugly and uglier to choose from when it came to Locust. Dom switched comm circuits to pick up Echo's sergeant, Rossi, swearing a blue streak as he emptied his magazine.
"Delta, you took your frigging time."
Marcus's voice cut in. "Yeah, well, we're here now. Want a hand?"
"We're two men down. What d'you think? We're holed up in the mall. Soon would be good." 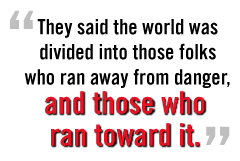 They said the world was divided into those folks who ran away from danger, and those who ran toward it. It was funny how you could overcome that instinct to get the hell out if you were trained hard enough. Dom's legs were moving independently of his brain, and as he rounded the corner behind Cole, he saw what was giving Rossi's men problems: it was the biggest Boomer he'd ever seen, and a squad of its drone buddies.
The boulevard was a big, open space with precious little cover. Dom and the rest of Delta made their way up the road by darting from doorway to doorway, and laid up for a moment behind an overturned dumpster.
The whole area south of the House of Sovereigns had once been full of manicured trees, expensive stores, and pavement cafes beyond Dom's pocket, but he'd window-shopped here with Maria before the kids were born. It was hard to tell that it had ever been a nice place except for the shattered stone façades. All the white marble statues that stood in the wall niches had gone; Dom couldn't even see where the raised flower beds had been.
The Boomer and accompanying drones were preoccupied with the entrance to the mall, another converted period building.
Its weather doors were long gone. But the security shutter - a huge steel portcullis suspended between fluted columns - had been lowered. The Boomer was rattling it as easily as a night watchman checking a flimsy door. The shutter wasn't going to last much longer.
Marcus had his don't- say- anything- I'm- calculating face on. "Rossi," he said, finger on his earpiece. "Rossi, is the mezzanine floor above the entrance still intact?"