Licensed IPs may be an insurance policy against commercial failure for publishers, but most gamers are hardly enthusiastic about titles based on movies. They have a reputation for poor production values and a lack of polish that would cripple games without the added name recognition. But occasionally, a developer is able to transcend the limitations of a license and make a game that succeeds on its own terms. Publishers are quick to reward these efforts with their trust - and the creative freedom that comes with it.

Blue Tongue Entertainment, a medium-sized Australian developer, has produced no less than five games based on licensed property following their acquisition by THQ in 2004. That's five games in under just four years - not bad for a team of 89. It's especially challenging working with established franchises and external stakeholders, given the cross referencing of assets and extremely strict deadlines the developer must meet. There's little room for artists, designers and programmers to truly invest themselves and leave their mark. 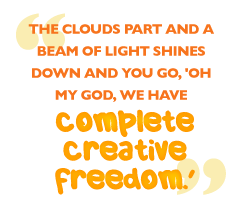 Last month, however, the team at Blue Tongue reached a new milestone for the company: They completed a game that, when originally green-lit, led to "a moment of unbounded joy" when "the clouds part and a beam of light shines down and you go, 'Oh my God, we have complete creative freedom to do whatever we like with this title.'" These are the words of Blue Tongue's Creative Director, Nick Hagger, about their latest release, de Blob. Like any other developer, however, they had to earn their time in the sun.

In 2006, a development team within Blue Tongue had just completed a Wii port of Barnyard, based on the movie of the same name. The game received a surprisingly positive critical reception considering its humble roots, but it also gave the team the opportunity to familiarize themselves with the Wii's unique control scheme. Senior V.P. of Product Development Steve Dauterman asked the team to start kicking around ideas for new Wii titles.

Meanwhile, the Dutch demo of The Blob, which featured a rather goofy, pear-shaped lead character who colored his environment by rolling around, had appeared on gamedev.net, capturing the attention of artists and designers throughout the development community. Jon Cartwright, Director of Production at THQ-owned Studio Australia, also saw the demo, and quickly encouraged THQ to pick up the license for de Blob.

"The executive team back in Agoura saw it, and one thing led to another," explains Hagger. "This cool, fresh new idea was snapped up by a big publisher in a genuine effort to try to be innovative and interesting with a Wii title."

THQ then assigned the de Blob property to Blue Tongue. However, de Blob's characters and environments still remained the property of the Dutch city of Utrecht, leaving Blue Tongue to inherit the pure gameplay mechanic - using a ball to splatter color around a cityscape. It turned out to be a perfect fit with the in-house concepts the team was experimenting with, such as transformational gameplay mechanics and interactive music.