Over the past several years many journalists, game developers and gamers themselves have tried their hand at drawing up a document that definitively catalogs players' rights. Reactions against DRM, including the recent Amazon review-bomb against Spore, comprise the majority of those arguments currently on the average gamer's radar, but older documents, including Raph Koster's Declaration of the Rights of Avatars, have been around for years now. They're hardly new concepts, but what is new is the force with which some disenfranchised gamers have responded to the perceived infringement of their right to game.

[A] report out of China tells the story of a 41-year-old man who stabbed an acquaintance who stole his "Dragon Saber" in the MMO Legend of Mir III and sold it for approximately $1,000. Initially, the injured individual sought the assistance of the police, but was told that the theft was not a crime, since virtual property is not covered as a protectable asset. Thereafter, the individual attacked the alleged thief at his residence.

The above case is notable not just because of the player's extreme response to the theft of his sword, but also for the Chinese government's attention to it. China, like the U.S., has its own share of moral crusaders fearful of the influence of computer games on its youth (perhaps not surprising when you consider the number of deaths that have occurred in direct relation to Chinese gaming). But in this case, because of the player's initial attempt to seek a legal, nonviolent resolution to his problem, the consequence of gaming activities outside the current structures of law were thrown into sharp focus.

From a game development standpoint, part of the cautionary tale here is the ease with which Legends of Mir could have resolved this situation. Had they created a policy system whereby the player could report the breach of his account and reacquire the missing weapon, this entire incident could have been avoided. 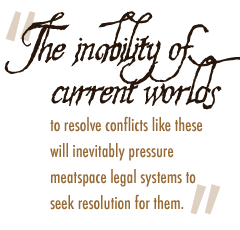 Were they obligated to do so? Of course not. But the inability or unwillingness of current worlds to resolve conflicts like these will inevitably pressure meatspace legal systems to seek resolution for them.

This isn't necessarily a bad thing. Resolving civil disputes is one of the primary functions of meatspace law. But eventually these incidents will turn the legislative Eye of Sauron upon the online world in question, and maybe even other online worlds with a foothold in that country. Given the stakes (and the fact that, unlike a real sword, a virtual sword can usually be restored with a one-line console command), it doesn't make much sense from a business perspective to allow incidents like these to happen.