On the other hand, meatspace legal systems will probably eventually need to deal with a person predisposed to lethal violence. But in order to parse the full details of this crime, the legal system needs to analyze the precise causal chain wherein this individual sought (and was denied) lawful recourse. Though there is no justification for the attacker's actions, there is clear cause and effect at work that can be addressed at an institutional level. This was the case in China; the Chinese court system now defends virtual goods as legitimate property, eligible for grievance resolution through the judicial system.

A common response to situations like this by both Western gamers and developers is "man, China is a weird place." But the differences between China and the West in this case have more to do with scale than cultural norms. So many people play online games in Asia - and play them so intensely - that social problems in meatspace society inevitably emerge in virtual worlds as well. Richard Bartle is fond of reminding us in the context of massive online games that one in every 100,000 people is a psychopath. (He actually underestimates the figure; the FBI and criminal psychologists estimate it could be closer to one in 100.) Currently 10.7 million people play World of Warcraft. You do the math. 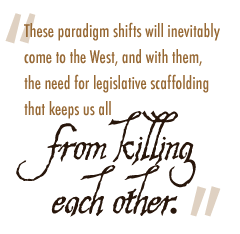 The general consensus, therefore, is that paradigm shifts like the ones that have already occurred in Asia will inevitably come to the West, and with them, the need for legislative scaffolding that keeps us all from killing each other.

Owning the Unownable
China's decision to recognize virtual property as a protectable asset is noteworthy because of its following decision to mediate directly between the end-users of virtual property without the facilitation of the online service provider. The idea that virtual goods belong to the subscriber represents a major difference between the jurisdiction of the Chinese legal system as opposed to that of the U.S. But China's response to the Legend of Mir incident could potentially have unintended and widespread effects throughout online worlds and the companies that maintain them.

Most EULAs (end-user license agreements) in the U.S. contain a clause preventing what's known as "third party jurisdiction." This means that if I have a grievance against another player in an online world, I can't sue or attack him or her directly; my contract is only with the service provider. Because there is no direct contract between individuals, an aggrieved player must make a complaint to the service provider, which can then exercise its contractual rights against the offending player. The problem that increasingly arises is that service providers, as many players have experienced, don't always have the resources to effectively serve as judge, jury and executioner, and they certainly don't have the massive legal infrastructure to deal with the myriad variations of conflict resolution that governments usually have. Worse still, sometimes the contract between provider and player isn't always legally fair.