Asia isn't the only region beginning to protect what most developers still assert doesn't belong to the player in the first place. In November 2007, a teenager in Amsterdam was arrested for stealing Habbo Hotel furniture valued at approximately $5,500. This sets legal precedent for the ownership of virtual goods that directly contradicts what is expressed in the EULA - how, after all, can you steal and sell something that doesn't belong to you? If all virtual property belongs to the developer, there should never be a change in ownership. But many court systems are finding (excluding that of the U.S., which has generally avoided this issue so far) that because of the investment of time and money made in the pursuit of virtual goods and the injury that results from their theft, some kind of crime is clearly occurring for which the victims are entitled to resolution and legal mediation.

U.S. companies in particular avoid anything having to do with virtual goods ownership for a variety of reasons, but primarily to prevent the opening of the perceived Pandora's box of RMT ("real-money transactions," the trade of virtual goods for actual money). U.S. companies also perceive an erosion of the ownership of their IP if players are granted rights to what they create using the game platform. 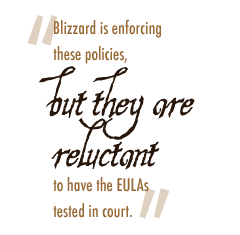 Dr. Andreas Lober was one of two legal experts who presented at a session called "Virtual Worlds: Real Disputes Around the World" at this year's ION Conference. At the time Lober said that Blizzard was on a huge anti-RMT binge, banning thousands of accounts suspected of engaging in RMT. But if the banned individual got a lawyer and wrote a letter to Blizzard, the accounts were almost always reinstated. "They're enforcing these policies, but they are reluctant to have the EULAs tested in court," he said. With good reason ...

Unconscionable Contracts
Fortunately for gamers and other end-users of software, legal systems generally functions to protect those who become the collateral damage of unfair contracts - as some EULAs have been determined to be.

The most significant recent case in this area, now a household name among virtual law junkies, is Bragg v. Linden. Steve Augustino described the case at the aforementioned "Virtual Worlds: Real Disputes Around the World" presentation. In Second Life, Bragg found a way of buying property at a very cheap rate. Linden determined that it was an exploit and shut him down - banning Bragg's account, and, Bragg's lawyer asserted, illegally denying him access to thousands of dollars worth of virtual property. "The main issue," Augustino said, "was the enforceability of the arbitration clause in the Terms of Service." What the clause said was that all disputes had to be arbitrated, and they all had to be arbitrated in San Francisco. By California law, this was determined an unconscionable contract. "That's the legal term," he said, "that it's too unfair."