Linden claimed it was a contract of adhesion, that "there is no negotiation of the individual terms of service." ("Contract of adhesion" is another of those onerous yet commonplace legal terms in the online space.) "That's something that weighs against the enforceability of these EULAs. ... The court was concerned that the arbitration was too costly, and it was such a deterrent to bringing any kinds of claims against Linden Lab that essentially they could do whatever they wanted."

The judge decided that this ability to do whatever they wanted to the player - even though the player had, through the EULA, theoretically signed away any right to contest - was unfair. As with any EULA, the company holds the advantage because they write the contract; but if the contract itself is unconscionable, it may be indefensible in court, so companies have to exercise extreme caution not to balance their EULAs too far to their own advantage against the player.

Change Comes to Pixeltown
So what does this have to do with players declaring their rights? 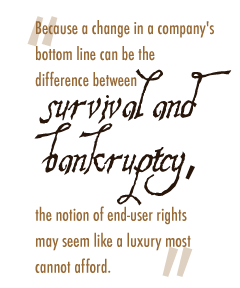 When it comes to DRM, it's unlikely that a company losing money to piracy (as difficult as that is to gauge) will alter their behavior on the basis their customers' arbitrary declarations. Bigger fish than any current game company have dominated these waters for some time, employing DRM for limited use licenses, clickwrap agreements and a host of other creative legal responses to the ultimate problem of manufacturing scarcity where none exists. Because a change in a company's bottom line can be the difference between survival and bankruptcy, the notion of end-user rights may seem like a luxury most cannot afford.

But as the concept of ownership becomes hazier - and companies more insistent on maintaining it by punishing their paying customers in the process - so are end-user rights more worthy of attention as a mass expression of consumer desire. A clickwrap agreement cannot supersede the basic tenets of property ownership. The tighter DRM grasps, the more legitimate customers will turn to piracy or other means of subverting oppressive license agreements. And the further DRM reaches into a consumer's fair use of a purchased product, the more likely a judge is to support the end-user and not the software company.

What's clear in all of this - in a field that is about as clear as pea soup - is that these issues aren't going away. Whether interpreted as a manifestation of player desires, or inalienable rights that form the bedrock of our online pursuit of happiness, these impassioned assertions are proof that games (and gamers) are evolving in fascinating ways. The declaration of rights has never been without conflict in human history. Games are no exception - and the stakes might be higher than you think.