I don't have too many memories of my driver's education course, and what I do recall does not involve education, driving nor any combination of the two. There was an embittered amputee who warned the class about speeding, and a trucker who told us that she was "an agnostic on seatbelts" and that "a couple beers probably won't get anyone killed" before the instructor cut her off. I spent the month-long course reading gaming magazines in the back of the room and avoiding the awkward sociability of Terry, whose black plastic "nerd glasses" misled me into thinking he might be a kindred spirit, before further conversation revealed that those glasses had more personality than the guy wearing them. By the end of the course, I was qualified to fill out a multiple choice exam at the DMV, but I didn't actually learn any of the things that make someone a good driver. For that I had to play a lot of racing games. 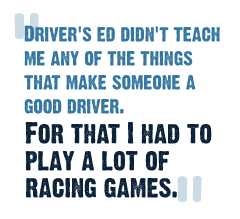 Before my insurance premiums are increased, let me explain. It's true that racing games by definition simulate the exact type of behavior that drivers are supposed to avoid, like resisting arrest by nudging pursuing police into oncoming traffic. Even serious racing sims like Papyrus' IndyCar Racing seem to have little relevance to someone whose primary automotive ambition was to borrow Mom's car for a trip to the mall. That said, the driving experience I racked up on the computer was worth a great deal more than any time I spent in a classroom or out on practice drives.

When you learn to drive with an instructor or, worse, a parent riding shotgun, you're not going to face anything really dangerous; making a left turn at a busy intersection is about as harrowing as it gets. The licensing exam doesn't cover the truly scary stuff: other drivers' mistakes, freak weather changes, high-speed blow-outs and the thousand other things that nobody can see coming.

In a driver's education course, students are taught to become mindless automatons behind the wheel. My instructor obsessed over things like stopping distances, following distances and the importance of coming to a complete halt at every stop sign. The entire instructional regime is an attempt to minimize the importance of skill and technique, insisting that if everyone simply uses indicators, checks mirrors and follows at a half car-length for every 10 miles per hour of speed, we'll be safe. This approach is in deep denial about the nature of the world.

Racing games let me explore the grisly possibilities of driving, and even encouraged me to do so. Why would so many of them include instant replay, if not to let me revel in mechanical carnage? Bad things happen all the time in a good racing game, because much of the fun comes from courting the kinds of disasters that you try to avoid in real life.

Even Better Than the Real Thing Tim Stevens 0 Comments