Male turkeys are not known for their ability to choose the best sexual partners. In fact, studies have shown they kind of suck.

In the 1960s, researchers from the Pennsylvania State University discovered they could easily trick male turkeys into mating with the stuffed dummy of a female turkey. The unsuspecting birds would perform their courtship displays and then try to copulate with the phony female. More surprisingly, and somewhat pathetically, the males performed the same behavior even as the researchers disassembled the dummy. It got to the point where if the researchers held up a fake female head on a stick, the males would still try to hump the spot of air where the nonexistent female's backside should have been. 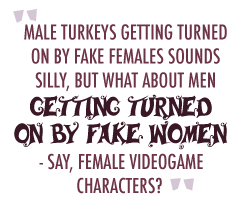 Male turkeys getting turned on by fake females sounds silly, but what about men getting turned on by fake women - say, female videogame characters? Through pornographic fan art, nude mods and a growing adult gaming industry, videogame characters have now become sexual beings. Men are indeed attracted to fake women, so does that mean we're more like our turkey brethren than expected?

Inspired by artists he met online when he was 13, Sephyroth now attends art school in San Francisco and hopes to create concept art for games and movies in the future.