Myths usually die slowly; their original form eroded by eras and changing cultural landscapes. The gun as a myth looked to fade in this way. Once attached to the Western, a genre that has lately taken on the qualities of a requiem, I thought the gun as a mythic icon might follow a similar trajectory. Instead, its death has been rapid and ignominious. Images of the gun are still prevalent, but the power once associated with them no longer exists. Nowhere is this more evident than in videogames. The gun has become an inert symbol: full of sound and fury, signifying nothing.

My fondest memories of guns are tied to movies. Usually it's a still image of the protagonist striking some mannered posture, the gun at the center of the frame as the focal point of the character and his motivations. These poses are numerous and famous. Whether it is the robber shooting the audience in The Great Train Robbery or James Bond's signature shot at the end of the opening credits, the gun is a potent visual image in our cultural cache.

Videogames aim for a similar goal, creating a mythos around and a connection with guns, but fail miserably. This is surprising, because it seems it would be an easier task for a videogame to achieve. The medium's inherently vicarious nature, and the necessity of making the player an actor within the narrative, seem like fertile ground for cultivating a strong connection between player and gun. Yet the gun is generally relegated to a forgotten visual aid, little more than a muzzle obscuring part of the screen or your character's body. Brightly colored flashes take center stage, the gun resembling an Independence Day sparkler more than anything else. And so players saunter through games collecting guns, as if in a firework store, wondering what their eventual effect might be, and then finally marveling not at the power of the gun but at the brightness of the sparks it emits. 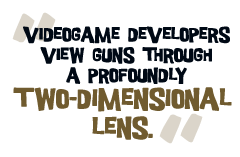 Videogame developers view guns through a profoundly two-dimensional lens. The gun is still a power-up, too practical in its uses to be the object of much emotional tension. When games were confined to two dimensions and only a handful of pixels, it was difficult to portray a firearm in any convincing way other than a fantastic ray of light spewing from the barrel. Players went through games amassing guns like so many mushrooms and fire flowers. Little has changed in this regard, as players run through any first person shooter scooping up weapon after weapon, discarding one in favor of another.