When Miles came into this world he had a ready-made fan club. The first-born child among a circle of friends, all of us geeks in our 30s beginning to think about what comes next, he has more honorary aunts and uncles than he'll ever know what to do with. For his parents and the rest of us Miles is a classic source of hopes, fears and fascination: What does it mean to create a new human being? What will Miles' journey be from tiny baby to adult? What will he learn, know and experience in life?

The first things we experienced, of course, were screaming and poop. Babies have a staggering capacity to produce both, and one of the benefits of being an honorary uncle is the right to hand him back whenever the alarms begin. I plan to be the one sneaking him sugar, booze and car keys later on, but for now my role is to watch diaper-changing and vomit-cleaning from the other side of the house. 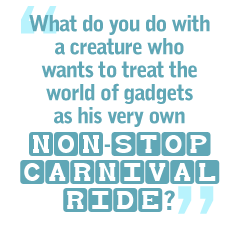 Then Miles discovered technology, and a whole new phase of fascination began. Like nearly all modern children he's taken to the family Xbox, PC, cellphones and TV at speed. His parents, blessed with a fair streak of techno-lust themselves, have mixed feelings about how to approach this: What do you do with a creature who wants to treat the world of gadgets as his very own non-stop carnival ride? What the hell kind of kids is our ferociously caffeinated generation going to produce? Here, indeed, is the real god game, both for Miles and those responsible for him. Like any god game there are choices to make and possibilities to explore. But behind it, at least for this honorary uncle, there's also the other side: Do I want to play this game someday myself, or is spectator mode enough?

"There were a basic set of decisions early on about levels and types of stimulation," says Miles' mother. "We had a 'no TV' policy in place until he was 18 months old, which I think was absolutely the right thing to do. But with some of the other stuff it's not that simple.

"Every time he sees Dad playing videogames he's fascinated. At first he enjoyed just watching characters on the screen, and then he realized they could be controlled ... we'd put him in a 'safe' section and let him move things around with the controller, just walking around, and that absorbed him. Even with such basic interaction you can see the sparks going off inside.

"In the same vein, he loves the keyboard and mouse on the computer. When he was younger and just wanted to bang any key, we found a website that reacts to any random input. He liked that for a bit, but I think he's grown into the idea of one button equaling one action. I'd open up Word for him, set the font really high and he used to like to 'type.' Now that he's older he's developed a knack for changing settings and views by himself, so when I come back to the computer I have no idea what's going on. Recently he figured out how to buy things through the Xbox and got Dad a game as a present, which led to some passwords being put in place and a bit more attention to where the controller gets left around. There's also the emerging issue of infant ninja cellphone use ...