Workers march single file, carrying out the day's task. Soldiers flank the column, ready to defend it from myriad enemies. But then tragedy strikes - the fire from the sky, a threat against which even the soldiers are powerless. Bodies sizzle and char while others flee, panicked and wild. So things go with ants and their cruel and capricious gods.

Since the dawn of the American suburbs, a dirt-smeared kid killing ants with a magnifying glass has been one of the iconic ideas of our culture, right up there with baseball, apple pie and the atomic bomb. Ant farms were a staple of Silver Age comic book advertising, and you can still find them in toy stores across the country. 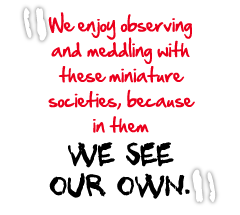 I'd bet good money the fascination goes back a lot farther than that, though. Find the least contacted community in the most underdeveloped corner of the world, and you will probably find kids with sticks playing with ants (assuming the area isn't dominated by siafu). The insect's charm is understandable. In ants, we find tiny but industrious creatures that work together to build cities and surmount obstacles far too great for the individual. We enjoy observing and meddling with these miniature societies, because in them we see our own.

In 1991, Will Wright combined this cultural cache with a scientific curiosity in what remains one of the quirkiest titles in the designer's oeuvre: SimAnt.

Up to that point, Wright's simulation games had functioned on a decidedly "macro" scale. They zoomed out, making big ideas easy to grasp and fun to explore. In the process, individuals within the systems he designed became abstract variables. SimCity put the player in the role of modern urban planner, but the "people" living in these digital cities were little more than points in a scoring system. The animal life of SimEarth really just represented the complexity and diversity of a given planet in a simplified model of a global ecosystem.

Wright's approach shifted with SimAnt. Here he zoomed in, creating a game that functioned on a "micro" scale. Focusing on the struggle for survival that occurs between blades of grass on a suburban lawn, SimAnt lets players control a colony of black ants in their war against the red ants. Players achieved victory not only by dominating the lawn, but by infesting the nearby house so thoroughly that the humans inside had no option but to move out.

Alternately, the player could opt for Experimental Mode. Here there were no specific goals, nor did the player control the ants. Rather, the player had a set of tools with which he or she could (surprise, surprise) experiment with the creatures. Players could place rocks and food at their whim, build insurmountable walls, dig tunnels, freely create black and red ants and create pheromone trails. They could even introduce ant lions and spiders into the environment. Wright had updated a basic human behavior for a new era - digital dirt in which kids were free to screw with ants to their hearts' content.

Gallery of the Day: 8 Images Showing How SimCity Has Grown DrStrangelove 19 Comments