I hadn't used my dice in years. Wasn't sure I still had them, even.

I used to carry them in a small, brown leather bag. It was rough, like coarse suede, and drew closed with simple strings. My father bought it for me one summer at a gift shop in Albuquerque.

That was 15 years and three states ago. I took the bag home with me to Texas, and it may have traveled with me to California, but I'm damn sure it didn't make it to Massachusetts, where I lived in the fall of 2003. Then, as I scoured my rented apartment outside of Boston for the dice I'd been carrying, unused, for so many years, I was fairly certain they were tucked into a velvet whiskey bag. A sign of something, perhaps.

I found the dice in the closet of a guest room, tucked into a red velvet bag that had once contained an academic achievement medal. I still have the medal, in a case with all the rest, but the bag must have, at some point, been reallocated for the purpose of holding dice. I must have found the dice before, cradled them, thought about them and put them into a new bag. I must have dreamt about using them again, rolling them as I set off on new adventures.

It must have been recent, the bag change, but I didn't remember it. Maybe I did it in my sleep. Seems to me I did a lot of things in my sleep back then, like I lived in my sleep. 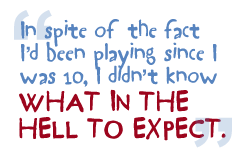 Dice found, I prepared myself. It had been a long, long time since I'd played a roleplaying game, and now I was off to play with a group of people I hadn't even met. It felt a little bit like the first day of school. I was nervous, and in spite of the fact I'd been playing since I was 10, I didn't know what in the hell to expect. I was, to be completely honest, a little scared.

I must have used the bathroom ten times before convincing myself to leave the house. I had a drink to steady my nerves and screw up some courage - a bravery potion - and even after another it was questionable whether I'd actually go through with it.

I discovered the campaign by accident, talking to a coworker. I'd spent about 15 months slumming it in Boston, pretending to write a novel and getting nowhere, when the empty ache in my bank account convinced me it was time to suck it up and get a job. So I applied for a position as a production manager at an outdoor theater, and that's where I met Neil.