Professional wrestling and other "entertainment sports" occupy a precarious position in our culture. Not quite sports, not quite theatrical performances, they defy conventional categorizations. Maybe that's why they're so hard to take seriously.

Entertainment sports are often described as "spectacle sports" because they rely so much on the theatrical and stylistic elements that surround them. The hyperbolic displays of aggression, elaborate props and staged interpersonal conflicts all become part of the "bigger picture" of how viewers experience and understand the event.

The athletes (or performers) play a key role in creating the spectacle. They are the main characters in an open-ended drama, the bodies upon which the story plays out. But not all spectacle sports are as heavily staged as others. Many unfold like any other sporting competition, without a predetermined script or outcome. In these sports, players toe an incredibly fine line between athleticism and roleplay, between adhering to the game's rules and conforming to the over-arching narrative. 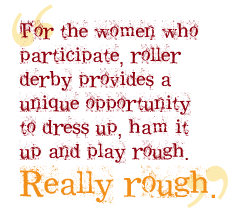 Roller derby exemplifies this delicate balancing act. Recently resurrected by grassroots, all-female leagues in the U.S., roller derby is an unmatched display of female aggression, parody and subversion. Beneath its hot pink "riot grrrl" exterior, however, roller derby is also a high-speed, full-contact team sport. For the women who participate, roller derby provides a unique opportunity to dress up, ham it up and play rough. Really rough.

Your Mama's Roller Derby
Like all good sports, roller derby has a well-defined and widely circulated origin story. In the mid-1930s, Leo A. Seltzer started holding roller skating marathons, in which couples attempted to skate the equivalent of the distance between New York and Los Angeles on an banked track. The events were a hit, but a big part of the attraction was seeing the skaters crash and collide into each other. Roller derby eventually transformed into a full contact team competition. It also became a nationwide phenomenon, complete with celebrity skaters, fan clubs and magazines.

Many of roller derby's most unique attributes took root during this period. Along with an emphasis on rough-and-tumble contact, leagues introduced dramatic elements and storylines. Managers encouraged skaters to be rowdy, and the skaters exaggerated aggressive moves for the crowd's benefit, accentuating important plays with the kind of theatrics and slapstick humor we've come to associate with professional wrestling.

Roller derby was also innovative in terms of its gender politics - it was the only professional sport in history in which women competed on an equal basis with men, playing by the same rules and earning comparable salaries. During the 1960s and 1970s, Joan Weston, the "Roller Derby Queen," was the highest paid female athlete in the U.S.

By the late 1970s, however, roller derby had more or less disappeared. Networks dropped it from television schedules, and without an audience or a source of revenue the professional league dissolved. For nearly 30 years, roller derby was relegated to the fringes of the burgeoning entertainment sports market, eclipsed by the rising popularity of WrestleMania and Motocross.