If you've never felt the irresistible urge to pretend you're a Final Fantasy character, you might find it ironic that people pick up cosplaying - dressing up as a videogame or anime character - out of a desire to fit in. But that's how it began for Jean.

"I was going to my first convention and found photos with all the costumes people wore," Jean, who declined to give her last name, says in an email interview, "and I thought that if you didn't show up in one you'd be the only person wearing 'normal' clothes." The hobby has had lasting appeal: Four years later, Jean is still a keen cosplayer who recently appeared in an issue of COSMODE - Japan's premier cosplay magazine.

Fitting in with one group might mean standing out in another, but the responses of people Jean meets are positive, if sometimes puzzled: "I've walked around in public in cosplay before and have never gotten any negative reactions. People are just curious. From what I've seen, people are actually pretty open to the idea once you explain it to them." 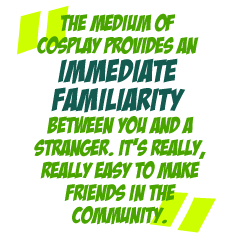 Within the community, however, it's an instant connection between participants. "It's actually my favorite thing about cosplaying: getting to meet people who share your interests," says Jean. "The medium of cosplay provides an immediate familiarity between you and a stranger. It's really, really easy to make friends in the community."

Jean's motivations go a long way toward dispelling the stereotype of cosplayers (and gamers in general) as social loners, but they're not uncommon. Author and game studies scholar James Newman, who has researched widely into cosplay for his latest book on videogame fandom, sees the hobby as intensely social. "These creations are designed to be seen by an audience and are created with the help and guidance of the collective intelligence of the cosplay community," he says.

"This social aspect of fandom is almost invisible within the popular and even academic community, as most people tend to focus on the game itself or maybe how it is played. It is only when you start to look at games as things to be played with - as resources to be used, reused, recycled, reinvented - that you realize the poverty of the idea that videogaming is a solitary pursuit."

Garry Kline, one of the administrators of CosplayLab.com, a site which hosts a community of over 40,000 cosplayers from around the world, also sees the hobby as a social outlet. "We get together to work on costumes, or watch anime," Kline says. "Some of us like to work in secret preparing to unleash our next greatest creation at the next convention, but I don't think that makes them a hermit crab. Cosplay is a way for people to break down the walls of difference and develop bonds of friendship by discovering similar interests."