When my 13-year-old brother bought World of Warcraft for me last Christmas, I knew how badly he wanted me to try it.

I had played RPGs before, but WoW was my first MMORPG. It didn't take much for me to get caught up in the camaraderie of so many people in the same world at the same time. I didn't care if they were Horde or Alliance - we were all playing the game together.

Skip ahead two months. With a crazy gleam in my eye, I chased down a low-level Hordeling in Southshore on my epic mount, hell-bent on mercilessly nuking him to the nearest graveyard. We had never crossed paths before that moment. He hadn't threatened or attacked me. In fact, he was innocently questing when I rode up to drop him like a bad nun's habit.

I stood over his body emoting: /fart, /spit, lol, lol, lol. I wanted the bastard to really feel how much I hated him. He looked grotesque. He smelled bad - in my mind, at least. And his worst crime of all: He was a low-down, dirty, no-good Horde.

Then I noticed something in my chat window. Right before crumpling to the ground, he had managed to type "/beg," pleading with me not to kill him. My callous laughter gave way to a single, penetrating flashback to when I, like the Horde at my feet, was Level 20. I was having a great time questing, but got manhandled by every high-level Horde I encountered. 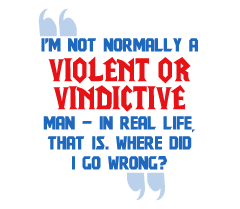 I'm not normally a violent or vindictive man - in real life, that is. Where did I go wrong? Before I could answer myself, three high-level Horde crested a nearby hill, and I spent the next few minutes trying very hard not to die.

But the question didn't go away. What happened to the wide-eyed, friendly gamer I used to be? I remembered countless hours of peaceful questing. I also recalled spending far less time dying at the hands of passing Horde. How could these relatively few bad experiences have affected me so deeply?

One theory that came to mind was what I like to call the "circle of bastards," or COB. It's a modified version of "what goes around comes around." High-level Horde beat up on me when I was new, and now, months later, I take out my resentment on Horde newbies.

Making "COB salads" explains a lot of behaviors in WoW, but there are many other causes. The Horde and Alliance look different. They're unable to communicate with each other - when they try to chat, each player can only see gibberish. Their territories are close together, and they have to "share" scarce resources.