Free speech. Evolving markets. An ever-fluctuating demographic from hardcore to casual. All of these issues facing the current generation of game developers are important. But the biggest concern for content creators is the same one that, in some capacity, many other industries are currently grappling with: globalization.

The ability for game publishers to reach an international audience has certainly contributed to the rapid growth of the industry so far. But this explosive growth has a potentially off-putting conclusion in an industry that thrives on creativity, imagination and the ability to create anything you can dream up.

The Ratings Game
Most countries where a game will potentially be sold have a rating board, censorship committee or some other organization - government run or not - responsible for regulating videogame content in that specific market. The United States has the ESRB (Entertainment Software Rating Board), Germany has the USK ("Unterhaltungssoftware Selbstkontrolle," or "Voluntary Monitoring Organization of Entertainment Software"), Australia has the OFLC (Office of Film and Literature Classification), etc. Having one of these organizations rate your game is usually expensive and may require more than one attempt at obtaining the desired rating across multiple markets if content is found to be too violent, culturally insensitive or obscene. Revising a game to "pass inspection" costs time, money and effort. 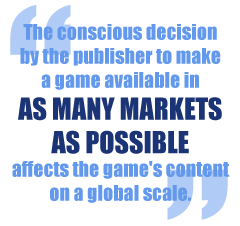 The conscious decision by the publisher to make a game available in as many markets as possible affects the game's content on a global scale. More markets mean more sales, the end goal of any profitable publisher. Which is where they often reach a conclusion that, in the aggregate, is potentially damaging to the industry at large: "Content neutral" games - ones where the developers have taken pains to remove all objectionable or otherwise controversial material - are a publisher's safest bet.

This hesitance to publish games that don't conform to nebulous standards of "public decency" has become endemic to the entire industry. In the United States, the ESRB's AO ("Adults Only") rating became functionally useless after the major console manufacturers stopped licensing AO games and major retailers like GameStop and Wal-Mart refused to stock AO titles. In Germany, unrated games are effectively banned, relegated to back rooms like those found in U.S. video stores for pornography. In other countries, unrated games are outlawed entirely. Advertising games is also heavily regulated in many countries. Germany, for instance, only allows games that are deemed appropriate for minors to be advertised before 11 P.M. with violations punishable by a fine up to 500,000 euros.

The intentions of these restrictions placed on publishers may be sound, but it's not hard to see the negative consequences. It encourages publishers to adjust the resources they spend on the rating and classification of a title according to internal sales projections. The more creative risks a game takes, the less likely a publisher will be to spend the money needed to ensure that it will have an international presence. Likewise, smaller developers without much brand recognition or clout are effectively prohibited from undertaking projects that aren't content neutral. Worse still, whole genres of games that allow players to create their own content within the game-world are at a huge disadvantage in countries with extremely strict speech laws. In some cases, it's enough to kill off a game before the first line of code is written.