Blood and Gore
Mark Rein, Vice President of Epic Games, stated earlier this year that "Microsoft doesn't show Gears of War 2 at Leipzig because they don't sell the game in Germany." The country's censorship laws are among the strictest in the developed world. With the recent Xbox 360 price drop in Europe that resulted in an increase in sales of over 200 percent, one would assume Microsoft would take a franchise as popular as Gears of War and stitch up some of the content to take advantage of their new European presence. 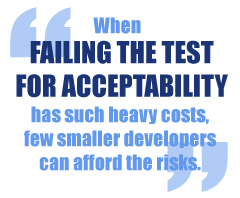 Microsoft has the money to make the necessary changes to its hit franchise, but they have nonetheless determined that such a venture wouldn't be profitable. Smaller publishers and developers, however, don't even have the option. That doesn't mean indies are barred from the German marketplace, but when failing the test for acceptability has such heavy costs, few smaller developers can afford the risks.

For even the biggest publishers, ratings are an uncertain prospect. Dead Space, from EA's Redwood Shores, was rumored to be banned in Germany, Japan and China for excessive gore and violence, but was cleared by Australia's OFLC (which banned Grand Theft Auto III for its treatment of prostitutes) and Great Britain's BBFC, responsible for the Manhunt 2 fiasco only a short time ago. It appears that the real issue facing developers and publishers who choose to illustrate violence in their works is neither the quantity nor the quality of the depictions, but rather the whims of the ratings boards to which they must submit.

Sex, Drugs and Post-Apocalyptic Washington, D.C.
Just as much as with violence, wildly divergent cultural views on sex and drug use in videogames can cause problems for games that don't play it safe. Fallout 3 drew criticism from the Australian OFLC over realistic portrayals of drug use, prompting Bethesda to revise the content of Fallout 3 on a global scale. The content Bethesda had viewed as appropriate for a U.S. audience was enough to pose a roadblock to an Australian release.

Likewise, a whole breadth of themes important to humanity itself, not yet fully explored in the medium, are in danger of falling to the wayside because of public outcry over sexual themes in games. After the negative exposure Mass Effect received from its single, relatively tame 30-second sex scene, it's understandable that developers would be wary of including any form of sexual content in their games. Countries like Great Britain, Germany, Japan and Australia have little problem with non-sexualized nudity - in this case, it's the U.S. who has stricter guidelines on all types of nudity and sex in games. There are plenty of themes to explore relating to sex, relationships and more mature content without entering the realm of pornography, but the prospect of creating content that is appropriate for an international audience with unique cultural norms about sex discourages exploration of the subject entirely.