Massively Prohibitive
Now more than ever, massively multiplayer online games are popular around the world. World of Warcraft makes more money than a small nation, and the microtransaction model for many games in Korea has proved successful worldwide. But the law of the land in huge markets like China is surprisingly prohibitive to the MMO genre. Back in 2007, The9, the company responsible for World of Warcraft's Chinese presence, preemptively modified the game to appease the Chinese censors, fleshing over the Forsaken race's boney arms. In 2004, Chinese censors banned a Swedish game called Hearts of Iron for referring to Manchuria, Tibet and Xinjiang as independent countries. China's censorship committees ban any content that, according to the Chinese state press, "threatens national unity."

The above are cases where the Chinese government has taken issue with developers' design decisions. But what about conflicts with the player base itself? MMOGs allow an unprecedented amount of player input, from character, pet and guild naming to any communications sent through the game. What happens when a Hunter character decides to name his pet wolf "FreeTibet," or a guild crops up with a name mocking the People's Liberation Army? Who pays the price - publisher, developer or player?

Short of creating a restricted word list many miles long, there's little that MMOG developers can do to safeguard themselves against this kind of government intervention. Only the safe, closed MMOG with little player input can succeed in places like China. Blizzard Entertainment had the money and international brand recognition to take their game to China. Smaller MMOG developers have only general guidelines to follow when sending their product off for classification in more stringent markets. 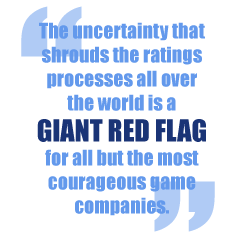 The Price of Success
The videogame industry will never stop pushing boundaries. It can't - gamers have an insatiable demand for more visceral experiences and will continue to flock to games that provide them. The problem, however, is the potentially heavy cost of taking risks on a global scale. The companies that have been most fearless about creating controversial games are the ones with the money to fight those battles, backed by publishers like EA who assume some of the risk. Smaller teams may find ways of breaking the boundaries in other content-neutral ways, like Jonathan Blow's Braid, which approaches storytelling through creative game mechanics. But the uncertainty that shrouds the ratings processes all over the world is a giant red flag for all but the most courageous game companies.

Content-neutral games can also be tremendously boring. Violence and sex are sharp tools in the developer's arsenal; without them, games would lose a great deal of their emotional impact. Would the culmination of your relationship in Mass Effect have as much of an impact as a block of text? Likewise, many in the industry see the Nintendo Wii's MadWorld, featuring beautiful Frank Miller-inspired visuals and a protagonist with a chainsaw for an arm, as the next likely victim of game-altering censorship. The creative exploration of potentially touchy subjects should not exclude entire nations from participating.

Globalization may have a net positive effect on the industry - witness the free exchange of game design ideas between Japan and the West in the last two decades, or the fierce competition between Sony and Microsoft that has driven innovation in the current console generation. But the same conditions that have led to the industry's current surplus of wealth may be creating a deficit of creativity. The next time a developer faces the decision of cutting content to facilitate a game's smooth entry into foreign markets, they would be wise to consider what's truly at stake.

Mathew Genzer McCurley is a freelance contributor to The Escapist.