I asked, "Can I write an article about new humor websites and webcomics?" The Escapist responded, "Okay, go for it." Said I, "Woohoo! I'm starting my research." And then 10 minutes later: "Holy crap."

For me, feeling like an idiot usually takes longer. I realize my incompetence gradually through steady labor, like digging a grave. This time, surveying web humor became, within 10 minutes - maybe 15 - stupidly hard. Humor sites, especially webcomics, spread like germs. Look at Comic Genesis - ye gods. Comixtalk, Fleen, The Webcomic List, Joystiq's Weekly Webcomic Wrapup and a few other news sites try to stay current, sort of. But in June 2008, after just eight months, Webcomics.com gave up, sold its URL and fled into the night.

The web has aggregated acres of once-diffuse scribblings. Hordes of idle young amateurs used to write stories for science fiction fanzines and scrawl cartoons for college newspapers, but no observer ever saw more than a fraction of their effusions. Today they still write and draw the same stuff, in the same quantities, but we see all thirty zillion of them, a newly visible concentrate of samizdat, on Fanfic.net and DeviantART and College Humor. 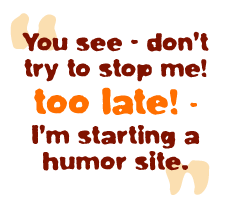 So the Idiot Feeling arrived fast this time, bringing its special friend Panic Attack. I had a personal reason for looking into humor sites, and because of that, an even greater reason to feel overwhelmed.

It's pointless to focus on "new" sites. On the web we're all, always, newbies. Take Schlock Mercenary, which in late August 2008 celebrated its 3,000th strip - or, as creator Howard Tayler put it, "3,000 consecutive days of no missed updates, no fillers and no guest strips." Even so, it's entirely possible to surf the web six hours daily, read Digg and Reddit and 250 RSS feeds, and yet miss this popular eight-year epic. (Trust me.) Which ones have you missed? Check the webcomics lists at Wikipedia or Webcomicz - or even Wikipedia's much shorter list of "self-sufficient webcomics" (those that support full-time creators). What, you don't know them all? Greetings, fellow newb.